On McGavock Pike, in Donelson, stands the historic antebellum mansion called Two Rivers.  The home was built in 1859 by David McGavock.   Recently my husband Jimmy and I stopped by Two Rivers Mansion, for a tour.  Our guide was Phil Claiborne, Metro Coucilman for District 15.  He is a founding member of the Friends of Two Rivers Mansion, and in 2015 serves as President of the board of the friends group.


Mr. Claiborne is quite knowledgeable about the history of the mansion and of the families that lived in the house.  He led us through the first and second floors of the mansion, explaining the function of each room, when it was home to the McGavock family.  The house is furnished with period pieces, from the 1880's, reflecting the most prosperous time at Two Rivers.  He told us of the different generations of McGavocks, who owned and lived in the house, for more than one hundred years.

We learned that in, December of 1966, Metro Nashville Government purchased the Two Rivers property, 460 acres, for $995,000 from the estate of Louise Bransford McGavock.  Mrs. McGavock died in 1965 and the property was sold to fullfill the bequests made in her will.  She was the last of the McGavock family to live in the house.

Today the house sits on a tract of 14 acres.  The remainder of the property was developed into Two Rivers Park and Golf Course in the early 1970's, with a parcel set aside for McGavock High School, which opened in 1971. 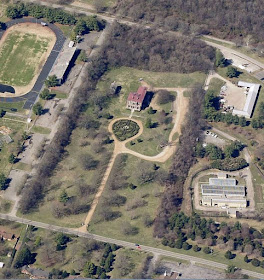 Tours are offered on Monday, Tuesday, Wednesday and Friday afternoons from 12:00 until 4:00, June through August.  Become a member of the Friends of Two Rivers Mansion before you go.  Tours and  most events at Two Rivers are free for members.  It's easy to join, online or by mail.  For more information click here - support Two Rivers Mansion

The mansion and grounds are available for use for private events and weddings.  Visit the Friends of Two Rivers Mansion website for more information on fees and availability.