The Trolley Barns That Never Were

A summary - the buildings were built beginning in 1939. They were completed after June of 1941. The last streetcar in Nashville ran in February 1941, months before the garages on Rolling Mill Hill were completed. Not Trolley Barns.
Back around 2004, an intern from the Metro Historical Commission came into Metro Nashville Archives looking for information on the "trolley barns" on Rolling Mill Hill. My co-worker Linda and I said together, there are no trolley barns on Rolling Mill Hill. We told him first of all Nashvillians called them streetcars, not trolleys. Linda had researched those buildings just a few years before while conducting an historical property survey for Davidson County, under the guidance of the Metro Historical Commission. I had researched the early transit system extensively including the car barns where the streetcars were kept. We both knew that no building on that hill had any connection to streetcars. Absolute proof that these buildings had no connection to trolleys or streetcars or public transportation is posted here for all to see.
There is a group of buildings on Rolling Mill Hill that were once used as motor pool garages, shops for various City of Nashville departments, and Nashville Water Works. The buildings were erected just at the time that streetcars were phased out in Nashville.
It became quickly apparent that we would have to prove that the trolley barn tale was false to keep it from becoming a part of Nashville's history. We succeeded, sort of. We convinced the Historical Commission but the story was popularized with other government agencies, in newspaper stories, and in public relation releases by the developers of the property. The Metro Council designated the "Trolley Barns" as a local Historic Landmark in 2004. Just recently another mention of the trolley barns popped up.
We found proof from many resources as to the use of these buildings. Here are a few that are irrefutable.
Text from the photo above, the Tennessean 11/5/1939. Shown above are two of the eleven new city garage buildings atop Rolling Mill Hill, which are nearing completion. More than 200 automobiles, trucks, and pieces of machinery are to be stored in the storage garages after the first of the year.
The garages, built of brick and steel, will cost approximately $125,000 when they are finished and equipped with repair shops, paint shops and, body building shops. the city is spending only about $25,000 in cash and an additional $40,000 worth of used materials as its share of the costs, while WPA supplied the labor and the remainder of the costs.
***
Text from the Nashville Banner June 20, 1941 - page 6 - "City Garages One of WPA's Outstanding Projects - In submitting a report to Mayor Thomas L. Cummings of the work of WPA in Nashville and vicinity during the past fiscal year, district WPA officials listed the completion of a group of city garages on Rolling Mill Hill off First Avenue, South, near the General Hospital, as one of the most valuable projects. This group of garages, pictured here, is used to house city trucks and all other city equipment used in maintenance work. The garages were built with a WPA appropriation of $57,806 and a city expenditure of $34,581. Seven buildings are now completed, one will be finished by the end of the month, and work on the last building to be constructed will start soon."
The map from a 1951 revision of a Sanborn Insurance map shows the buildings belonging to the Public Works Department of the City of Nashville. Most are listed as garages, two are designated for the Water Department and one is a sign painting shop. City Directory listings show that the City Dog Pound and the Sanitation Departments were located there as well. 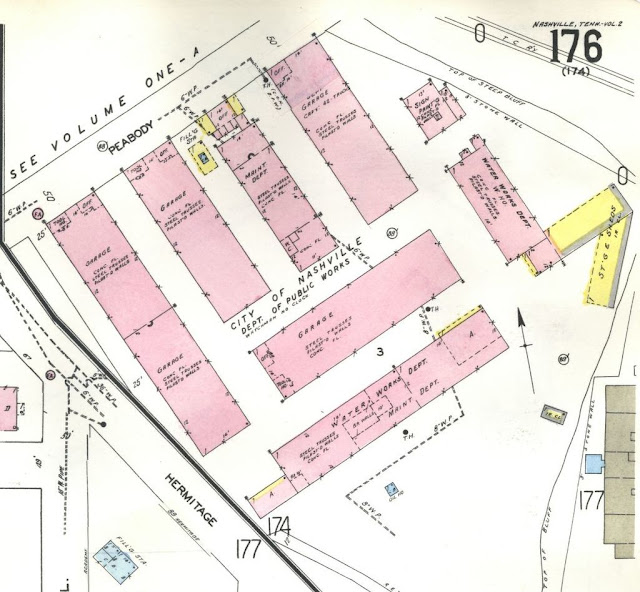 At least one of the buildings was used for the maintenance of city-owned vehicles and another for maintenance of police cars well into the 1990s.
The buildings used to house streetcars were located between 3rd and 4th Avenues North, near where the Municipal Auditorium stands today. This was north of the public Square and north of Charlotte Avenue.  After the last streetcar ran in February of 1941, the same buildings were used for city buses.
An urban renewal project in the 1950s, created James Robertson Pkwy and many new buildings including the Municipal Auditorium. This project demolished the African American business district that was between the State Capitol building and the Courthouse. It was in this area near Municipal Auditorium where the car barns or trolley barn stood.
The old bus barns were demolished in 1957. The new garages for the Nashville Transit buses were located north of Peabody St. and were near the garages on Rolling Mill Hill. The transit company was privately owned at this time and the City of Nashville built new garage buildings for the bus system and leased the buildings to Nashville Transit. Those buildings no longer exist. (see photo below from 1971.)

Posted by Nashville History at 12:23 AM No comments: