When World War I erupted in 1914, President Woodrow Wilson pledged neutrality for the United States, a position favored by the vast majority of Americans. Britain, however, was one of America's closest trading partners, and tension soon arose between the United States and Germany over the latter's attempted quarantine of the British Isles. Several U.S. ships traveling to Britain were damaged or sunk by German mines, and in February 1915, Germany announced unrestricted warfare against all ships, neutral or otherwise, that entered the war zone around Britain. One month later, Germany announced that a German cruiser had sunk the William P. Frye, a private American vessel. President Wilson was outraged, but the German government apologized, calling the attack an unfortunate mistake.

In February 1917, Germany, determined to win its war of attrition against the Allies, resumed its policy of unrestricted submarine warfare in war-zone waters. Three days later, the United States broke diplomatic relations with Germany; the same day, the American liner Housatonic was sunk by a German U-boat. On February 22, Congress passed a $250 million arms-appropriations bill intended to ready the United States for war. In late March, Germany sank four more U.S. merchant ships, and on April 2, President Wilson went before Congress to deliver his famous war message. Within four days, both houses of Congress had voted in favor of a declaration of war. 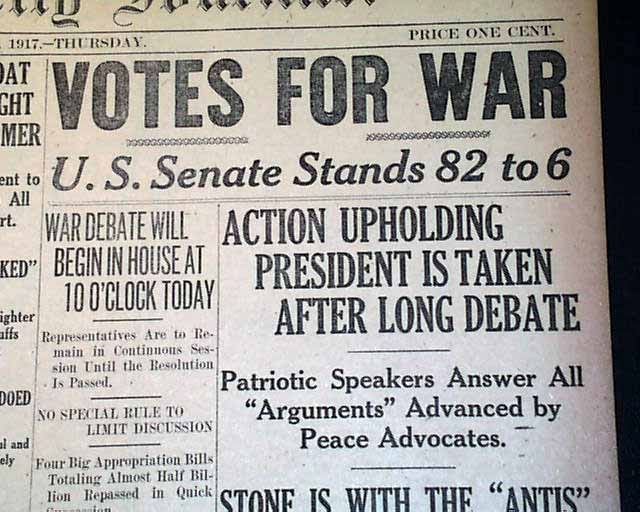 On April 6, 1917, two days after the U.S. Senate votes 82 to 6 to declare war against Germany, the U.S. House of Representatives endorses the decision by a vote of 373 to 50, and the US formally enters the First World War. At that time came the need for explosives or gun powder, and the need to build a new plant for that need.

In January 1918 the US Government bought 5,600 acres, at an average price of $105 per acres to build the powder plant in Hadley's Bend.

The U.S. Government asked DuPont Engineering to take on five major construction projects to make explosives for Allied forces in World War I. The most challenging was to be the world’s largest smokeless powder plant and a town to go with it at Jacksonville, Tenn. The newly organized DuPont Engineering Company completed construction in only five months. The first of Old Hickory's nine smokeless powder units went into operation on July 2, 1918, an impressive 121 days ahead of schedule. By the war's end, DuPont engineers had built what amounted to an entire city for 30,000 workers, with 3,867 buildings and 7.5 miles of double-tracked railroad. By September of 1918 the plant was producing 700,000 pounds of smokeless powder a day. It was from this plant, at Jacksonville, that Nashville earned the nickname, "Powder City of the World."  After the war ended on November 11, 1918, the powder was no longer needed and the plant soon closed.

The Nashville Industrial Corporation did not become actively identified with the development
of Old Hickory until October 12, 1920, when announcement was made from the War Department in Washington that the plant had been sold to that company, after due consideration of all bids that had been presented.  The former gunpowder plant built, at a cost of $83 million dollars, was sold to the Nashville Industrial Corporation for $3.45 million dollars.  Prior to that time the company had been organized and incorporated and had been among the seven or eight active bidders for the purchase of the plant. The decision of the government to sell the plant was made in 1919, and actual negotiations were conducted practically throughout the entire year of 1920. With the announcement of the sale in October, plans were immediately made by the government to transfer the property to the local corporation, and the transfer was made on December 15th of the same year, at which time the government officials retired and the Nashville Industrial Corporation took charge of the entire plant and village, together with all maintenance and operating work.

During the period of 1921 and 1922 the activity at the plant consisted for the most part in the maintenance of the large village, keeping the houses and buildings intact and the roads in good repair, and the selling of machinery and equipment. Several stores and sales yards were established at various parts of the plant, from which operations were carried on. Temporary buildings were dismantled and the lumber and building materials sold locally. The immense stocks of supplies that were on hand for the maintenance of the powder were placed in stores and sold in all parts of the country. The railroad between Jacksonville and the main line of the Tennessee Central at Stone's River was operated by the company, providing an outlet for shipment of materials sold, and all other utilities, including the power line, telephone, water, and sewerage plants were operating and in good repair.

The Nashville Pulp and Paper Mills Company purchased a portion of the munitions plant in June 27, 1921 for $123,000 and established a small paper mill.

During the two years of 1921 and 1922 the population of the village varied from two or three hundred to six or seven hundred persons, depending on the immediate needs of the plant and activity at that point.

Early in 1923 there were rumors of the securing of a large industry that would take over a considerable acreage at Old Hickory, including the village. These rumors were not verified until July 14th 1923, when the announcement was made that the Du Pont Fibersilk Company, the name being changed to Du Pont Rayon Company, had purchased the village and a plant site. This announcement was greeted with enthusiasm on all sides, particularly in Nashville where the business men realized that the coming of a large industry of this kind would mean permanent development of Old Hickory and a permanent benefit to Nashville.

Senator George Gruver Wilson of Colorado, a former resident of Old Hickory was responsible for giving the Village its present name. He was in the advertising department of the Nashville Industrial Corporation (NIC) when Old Hickory was known as Jacksonville, Tennessee. It was through his recommendation that the name Old Hickory was chosen to replace the original name.
The following excerpts from a letter written by him October 30, 1923, to the First Assistant Postmaster General stated: "You may know that in 1917 there was not a town or post office here, but that at the erection of the Powder Plant both sprang up. Out of respect to President Andrew Jackson, whose home, "The Hermitage" is three miles from here the name Jacksonville was selected.. Since Jackson is reverently known throughout the south as "Old Hickory" what more distinctive tribute could be paid him than to call this place Old Hickory instead of Jacksonville?"

Confusion in the mail between Jacksonville, Florida and Jacksonville, Tennessee was direct cause for requesting a change of name.  Acting Postmaster General John H. Bartley replied that an order had been issued changing the name of the Post Office to Old Hickory effective December 1, 1923.

Senator Wilson's interest in Old Hickory never ceased. He was a Mason and maintained his membership in the Old Hickory Lodge. He graduated from the University of Colorado.
Senator Wilson died in July, 1957.

Posted by Nashville History at 2:59 PM