Lindsley Hall, The Old and the New


On several occasions, I have been asked about Lindsley Hall, a building that was a part of the University of Nashville. Called College Hill and Rutledge Hill, the campus of the University of Nashville, was situated on this hill, to south and above downtown Nashville.  The map shows the layout of the campus in 1908.  Both the original Lindsley Hall and the Chapel Building, which has come to be called Lindsley Hall, are shown.  Market Street, now Second Avenue South runs along the west side, which was the front of the campus

The original Lindsley Hall was a three story building that was northeast of the chapel building. The photo of the building below, was taken in 1864, during the U. S. Civil War.  The building was being used as a hospital for Federal Officers.


On this map we have the advantage of seeing both the old and the new as they were located in 1888.  This corresponds with the 1908 map posted earlier on the page.

The two story building that we know today as Lindsley Hall was a part of the university campus.  It thought to have originally been the Literary Building of the University of Nashville.  It was designed by Adolphus Heiman and constructed in 1853.  It was known early as the Stone Building, and is designated on city maps, in 1888 and 1908, as the Chapel Building.  The photo below was likely taken from the third floor of the original Lindsley Hall building. The two story building in the foreground is the same building, that is today called Lindsley Hall.


Below is an early view, date and original source is unknown. I found this and another photo on a blog called South Nashville Life.


This postcard view, from the collection of Nashville historian Mike Slate, is labeled University of Nashville.  It was likely made when the State Normal College, later George Peabody College, occupied the campus.


The image below is familiar to many Nashvillians, over the age 50.  In the late 1960's when this photo was taken, Lindsley Hall was home to the Nashville Children's Museum.  Nashville students, in the 1950's and 60's enjoyed many school field trips to the museum.  It was also a favorite weekend and summer destination for children and their families.


This is Lindsley Hall today. It began to be called Lindsley Hall sometime in the 20th century, after the original had been demolished.  The building is now used for Metro Government Offices.  The original Lindsley Hall was named in honor of  Dr. Philip Lindsley, the first president of the University of Nashville.


This is a 1937 aerial of the Nashville public square and surrounding area.

Upper left are the street car barns.  This building was used to house street cars until 1941, and buses until 1959. The car barns were torn down for the construction of James Robertson Parkway.  Contrary to popular belief there were never any street car/trolley barns on rolling mill hill.

Upper center is the new 1937 Davidson County Courthouse and the 1897 City Hall.  The city hall was demolished shortly after this photo was made. Above the courthouse is the new 1937 market house and city hall. The 1937 Courthouse and the 1937 Market House are still standing. Upper right is the Publishing House Block, built in the late 1870's and next is the City Hotel Block.  The Publishing House Block was torn down in the early 50's for construction of the Victory Memorial Bridge and the City Hotel Block was demolished in 1976.

In the lower section of the photo, left to right, is the American National Bank building, also known as First National, Fourth and First National Bank , and First American Bank.  It was built in 1916 at Fourth and Union and demolished about 1970 for the construction of a new First American Bank building.  Next is the American Trust Building, built in 1906 as a five story building.  An additional ten stories were added in 1925.  The American Trust Building is still standing. The next building is the Stahlman Building built in 1907.  Because of the demolition of three entire blocks of buildings between First and Third Avenues and Union Street and the Public Square, the Stahlman Building is now just across from the courthouse.  And finally the Washington Manufacturing Building, standing in 2015, and built in the 1870's, is on the lower right.

If you are interested in reading more about Nashville's public square click on the link.
Posted by Nashville History at 1:10 PM No comments:

Passing through the center of most county seat towns, one tours the public square.  It is often a place of the past, with buildings, some centuries old, lining streets and surrounding the county courthouse, which stands in the middle.  So once was, Nashville's public square.  In the early1950's, before the destruction of buildings began, the square looked much like any town, perhaps a bit larger, because of the size of the town it served.  The square was a center of commerce, from the time the first lots were sold in 1784.  Early businesses, shown on an 1804 map, include several store buildings (one was built of logs), and a couple of taverns surrounding the courthouse, market and jail.  The town grew, and more buildings went up.  Fires were frequent, sometimes taking several buildings down, requiring new buildings. An 1832 map highlights two large hotels and a bank on the public square along with many stores selling wares of every description.  From the middle to the late 19th century, several large buildings were erected, and named for the owner, such as the Ensley Block, the Morgan Block, the Hicks Block and the Burns Block.

The wonderful photograph posted below, of a building on the public square in Nashville, was reason enough to want to know more.  Known as the Burns Block, the building was owned by Michael Burns, an Irishman, who came to Nashville as a young man.  He had learned the saddlery business in his native Ireland, and settled in Nashville in 1839 to practice his trade.  In 1845, Michael Burns purchased the rear section of lot 24 which ran along Market Street between the public square and Union Street.  He started his saddlery business at that location, soon after. In December of 1861, Burns purchased an adjoining part of lot 24, that fronted on the public square. Burns was a very successful businessman.  He was a railroad man, serving as President of the Nashville and Chattanooga Railroad.  He was also a banker, associated with First National, Third National and American National Banks.  He was a close friend to Andrew Johnson, who became President at the death of Abraham Lincoln. Burns served in the Tennessee Legislature in 1882. The building that Burns built, stood at the southwest corner of the public square at Market Street.  News ads and city directory listings mentioning the Burns Block begin to appear in 1871, and that may be the year the building was completed. The building had offices and residential rooms for rent, on the upper floors and the lower floors were used for retail. During the early 1870's several attorneys, including West H. Humphreys, and architect, William C. Smith, had offices in the Burns Block. In 1875, S. Powers and Sons, Clothiers were located on the first floor of the building. In 1879, Powers moved out, and Lebeck Brothers moved in.

Lebeck Brothers was a dry goods store, operated by brothers, Michael, Louis and Samuel Lebeck.  The store sold dry goods of every sort.  They promised satisfaction to every customer.  One ad for the store stated that Lebeck Bros., "make it a rule to place on sale everything new and desirable as soon as it meets the approval of fashion leaders in New York and Paris."

Late on the night of January 2, 1897, a great fire broke out on the Nashville public square.  It was reported to have started in Lebeck's Store.  When the fire was over, in the early hours of the next morning, the Burns Block and several other building on the Public Square had been destroyed.  The building at the south end of the market house, which was used for City Hall was badly damaged.  Also several buildings on Market Street, were lost. Damages were said to have exceeded $500,000. Lebeck Bros. relocated and was never again on the public square.  Lebeck's was in business in Nashville for about 75 years, in several locations.  When the store finally closed in 1942, it occupied a building at 6th and Church.

There have been many changes to the public square since the big fire that claimed the Burns Block. Entire blocks were removed and every building on the public square torn down and replaced.  The oldest building remaining from the original square is the Ben West Municipal Bldg, that opened in 1934 as the City Market House.  The location of Lebeck Brothers today,  would be just about in the middle of the Public Sqaure Park in front of the courthouse. 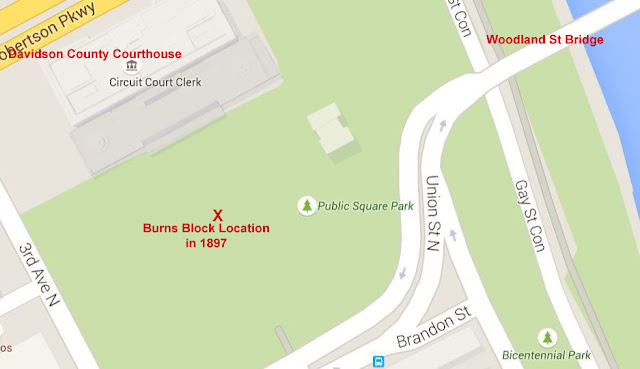 Posted by Nashville History at 10:04 PM No comments: