Pictured here, is one of a few remaining art deco structures in Nashville. It is located in the 700 block of Church Street at the corner of 8th Avenue North.  Built for and first occupied by Sears & Roebuck, in 1936, the structure is on the site of the proposed federal courthouse.  It is scheduled to be demolished when funds become available to build a new courthouse on the site.

The land on the southeast corner of Church Street at 8th Avenue North was a part of lot 150, in the original town of Nashville, surveyed and plated in 1784.  John Boyd was the first owner of the lot, granted to him by the Commissioners of the Town of Nashville.  The street names were different then, Church Street being Spring Street and 8th Ave. was Spruce Street.   In 1896 Victor E. Shwab, and his sister Augusta Shwab Dickel, bought a narrow lot at the corner of Church Street and 8th, where the old Sears building now stands.  Augusta was the widow of George Dickel.  She inherited her husband's controlling share of the George Dickel Tennessee Whisky operation at his death in 1894.  She and her brother, as partners, began to invest in property.  Within a few years of the first purchase on Church Street, several adjoining parcels were bought, including the lot where the Paramount Theater stood.  Shwab helped to manage the business affairs of his sister and at her death in 1916, he took control of the Dickel distillery as well as Augusta's real estate holdings. Shwab died in 1924 and the lots on Church Street passed to his heirs.


In 1935, the family and heirs of Victor Emanuel Shwab, entered into an agreement with the Sears & Roebuck Company to erect a building at the corner of Church St. and 8th.  Sears had located in Nashville, on the northwest corner of Broad Street at 12th, about 1928 and had outgrown the space. The Shwab heirs agreed to provide a five story and basement mercantile building, with a mezzanine floor, before the beginning of the lease term in April of 1936. 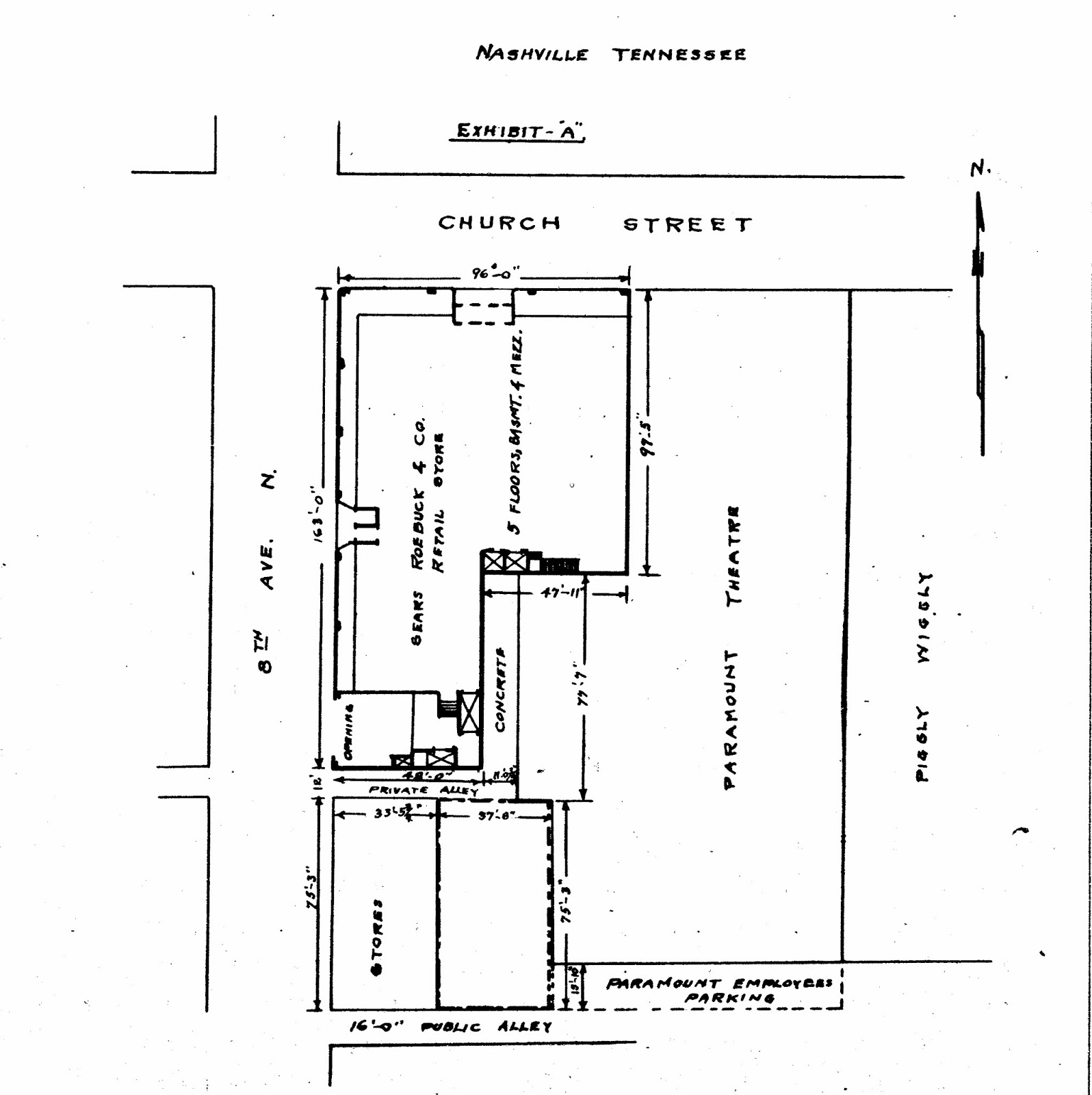 The building was to have a fire sprinkler system, two passenger elevators and one freight elevator and an air conditioning system on the basement and first floors.  The lease period was to be for twenty years from April 1, 1936 through April 1, 1956.

Sears had an option to break the lease midway, in 1946.  They chose to stay on, until the end of the lease in 1956, when Sears moved into a new building, a few blocks away, on Lafayette Street at 7th Ave. So.

The Shwab heirs continued to own the building on Church Street, leasing to various tenants.  In 1957 National Stores occupied the building.  About 1968 a Ben Franklin store was there.

In 1969 the Shwab heirs sold the Paramount property adjoining the Sears building to Martin Theaters.  In that same year, the Sears building was sold, to Paul and Shirley Gold, owners of a local jewelry company.  The company founded by Paul Gold and Dave Silver, had been located in the old Tinsley Department Store building at 7th and Church for a number of years.  After the purchase, the Gold's moved their business, Gold & Silver Jewelers of Nashville, to the opposite end of the block, to the old Sears Building.   For many years the old Sears store has served the State of Tennessee as an office building.  The wrecking ball has not arrived, as yet.  However the fate of this building seems to be sealed.  Go take a look at one of Nashville's fine old ladies before she is gone.