The Tennessee Century Farms Program was created in 1975 by the Tennessee Department of Agriculture. The program was designed as a way to recognize and document land in Tennessee, owned and farmed by the same family for 100 years or more. Since 1985, the Center for Historic Preservation at Middle Tennessee State University has been in charge of the program. There is a great website dedicated to Century Farms

View Tennessee Century Farms by clicking on the county.
Posted by Nashville History at 3:55 PM No comments:

This link is to a compilation of address listings along Gallatin Pike from the city limits in 1950 at Cahal/Carolyn out to just past where Briley Parkway crosses Gallatin Pike today. Because the directories were split into city and suburban by 1960 the listings start at Litton Avenue in that year and at McGavock Pike in the following years. Eventually I hope to add the listings for the addresses that are missing, from other directory volumes, in 1960 and after. Often I entered residence rather than the actual name given if the resident was the same. Business names are listed as I found them. In some decades there were several listings for a single address and others there was only one. Occasionally an address [street number] disappears from the directories. Those are marked as na. This does not mean the address no longer existed, it may simply have moved into a different volume of the directories.

Today I was reminded of an old house, that I had long ago been curious about, by a facebook friend. She posted a photo of the house, which is located on McCarn Street near Porter Road. It got me wondering. 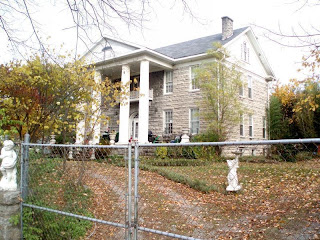 I first became aware of the big house at 808 McCarn Street in 1973, when Jimmy and I bought our first house a few doors away at 814 McCarn Street. The house was big and made of stone and looked very old to me. We had a neighbor lady who had grown up in the area. She said the house had belonged to Jefferson McCarn. She told me that when she was a child, the front lawn of the house sloped down the hill all the way to Porter Road, with no houses between to block the view. I suppose it was she who told me there had been a much older house on the property that had burned and the present house was built on the foundation of the old one. I already knew a little about Jeff McCarn. He was the was chief prosecutor in the murder trial of Edward Carmack, who was killed in 1908, by Duncan and Robin Cooper. McCarn was born in Arkansas in 1862. He moved to Nashville to attend Vanderbilt University and received a law degree from Vanderbilt in 1894. He married Mary D. Allison, daughter of Judge Andrew Allison of Nashville, Tenn., on Oct. 9, 1895. McCarn began his law practice in Nashville in 1894. In 1908 he was appointed district attorney general of Davidson County. He was appointed United States District Attorney for the Territory of Hawaii in 1913. He and wife Mary were parents to Cornelia, Andrew and Mary McCarn.

I worked briefly on a local survey of historic properties and learned to how to use architectural guide books to help determine the age of a building. The neoclassical style of the house and the cast stone building material are the primary clues that it was built in the early 20th century. A deed search shows that Jeff McCarn and his wife Mary bought the house in October of 1921.

Robert Powers purchased the property in 1913 from George Waters and his wife Betty and in 1914 Powers subdivided the tract into 57 lots, most being about 50 feet wide but of varying lengths. The boundaries of the tract were Porter Road on the west, Waters Ave. to the north, Riverside Drive to the east and Tillman Avenue to the south. One lot, much large than the others, was labeled the residence lot. It fronted on the street now called McCarn, 150 feet and ran back 377 feet to Washington Ave.

Powers sold the "residence lot" about the same time he subdivided the property to Mrs. Mollie Campbell and her husband H. Taylor Campbell for the sum of $11,250.00. The proposed street running in front of the residence lot was name Campbell Ave. by Powers. The house was too far out of the city limits to show up in early city directories. Once it does show up, with the Campbells' living there, in 1914, it is listed simply as being on Porter Rd se {southeast} corner Waters Av. The house is not listed at all in 1915 and the Campbells' are listed as living on Villa Place. This may have been the year the old house burned. The house is once again listed in 1916 and the Campbells have returned. In 1920 Mrs.Campbell sold the residence lot to Mrs. Lillie Omohundro for $14,500.00. Mrs.Omohundro sold the house one year later in 1921 to Jeff McCarn and his wife Mary. The McCarn family lived in the house until the death of Mr. McCarn in 1947. McCarn's will directed that all of his real estate be placed in trust, for the use of his wife, and to eventually pass to his children.

The oldest house on the street is most likely the one at 802 McCarn. More research is needed but it appears the house may have been built by Eugene Cato about 1914.
Posted by Nashville History at 11:39 PM 10 comments: