Each time an old building is demolished to make way for a new one, we all feel a bit of loss and sadness. Gallatin Pike through the Inglewood community is a mixture of old and new.  Many of the buildings that house businesses are relatively new.  The historic treasure of Inglewood lies in the older homes that line several blocks of Gallatin Pike.


When I wonder what was once there, my thoughts always go back to the earliest times in the settlement, when there were only a few farms in the area. The original 640 acre grants the first settlers received for coming here, to settle and protect the area, when it was wilderness.  The plat map below shows just how few landowners lived along the main road, in the 1780's, from McGavock Pike all the way to Neely's Bend Road.


The original buildings on these farms were built from logs.  Later, larger houses were constructed, often around the log building, so that it remained hidden inside.  A few of the antebellum homesalong Gallatin Pike were Evergreen, Maplewood, Glen Echo, Martha Martin's home, the Maxey house, and William Williams' home.


As the farms were divided into smaller tracts and finally into neighborhood subdivisions, the older houses began to disappear and newer homes with smaller lots of land were built. As neighborhoods became more densely populated, businesses opened, usually clustered together, around a crossroad.

The area around the intersection of Gallatin Pike and Greenfield Avenue is certainly a busy one, today.  It has been the location of grocery stores, churches, schools and other businesses for many decades. Still all was quiet and mostly residential in the area, until about 1920 when the growing popularity of the automobile, brought changes.  A filling station and a garage opened nearby on Gallatin Pike. By 1930 there were several groceries, a barber, two drug stores, a restaurant and several filling stations, within a couple of blocks, on either side of the intersection. Following is a brief history of one Inglewood business.

Leslie C. Burrus was an Inglewood businessman from the 1920's until the 1940's.  He opened one of the first businesses, a filling station, on Gallatin Pike, near Greenfield. A Kentucky native, he was living in Inglewood by 1917, when he registered for the draft. World War I was raging in Europe, and in June of 1917, he became a was a member of the 114 Field Artillery Battery E, 30th Division, (Old Hickory) of the Army National Guard.  He served in France with his company, until he was discharged in April of 1919.

On August 7, 1922, the war hero, Leslie Burrus was once again living in Inglewood, when he married Charlsie Mai Wilkinson. In 1924 the couple purchased a lot at the corner of Gallatin Pike and Masonic Home Road (now Home Road) and that same year opened the Inglewood Burrus Filling Station. The couple also ran a cafeteria in the filling station building.


A family member of Mr. Burris, in a story written for a Burrus family tree, called him the "Honorary Mayor of Inglewood."  The story goes on to say that Burrus, a successful businessman, started his small station with one gas pump.  He built a new larger building and eventually had 18 pumps, servicing neighborhood cars and the big trucks that traveled Gallatin Pike, in the years before interstate highways.  He and his wife operated a restaurant at the location called the Inglewood Cafeteria.  The family story says the restaurant offered curb service and live "big band" music, performed by Vito Pellettieri and his orchestra.  A 1930's ad for the restaurant states it was  "Home of Toasty Barbecue."

In the early 40's Leslie Burris retired and leased his restaurant to Gus Gevas.  Gus and his wife Sophie, operated a restaurant called Creamland. Over the next few years the filling station was used for various purpose.  In 1944, Leslie and Charlese sold the property to Crescent Amusement Company.  Crescent bought the Burrus lot and several surrounding parcels.  For the next few years, until 1948 Gus Gevas ran Creamland, which was a neighborhood gathering place for teens.    By 1950, the Burrus building, which had housed the filling station and restaurant, was gone.  The Inglewood Theater opened on the site in 1950.


The Inglewood Theater closed in 1977. The building housed Joywood Salvage for many years.  In the late 1990's the old theater building was razed and an Eckard Drugstore was built on the site.  In 2015 a Family Dollar store is on the site.

Posted by Nashville History at 3:46 PM No comments:

Posted by Nashville History at 10:15 PM No comments:

On McGavock Pike, in Donelson, stands the historic antebellum mansion called Two Rivers.  The home was built in 1859 by David McGavock.   Recently my husband Jimmy and I stopped by Two Rivers Mansion, for a tour.  Our guide was Phil Claiborne, Metro Coucilman for District 15.  He is a founding member of the Friends of Two Rivers Mansion, and in 2015 serves as President of the board of the friends group.


Mr. Claiborne is quite knowledgeable about the history of the mansion and of the families that lived in the house.  He led us through the first and second floors of the mansion, explaining the function of each room, when it was home to the McGavock family.  The house is furnished with period pieces, from the 1880's, reflecting the most prosperous time at Two Rivers.  He told us of the different generations of McGavocks, who owned and lived in the house, for more than one hundred years.

We learned that in, December of 1966, Metro Nashville Government purchased the Two Rivers property, 460 acres, for $995,000 from the estate of Louise Bransford McGavock.  Mrs. McGavock died in 1965 and the property was sold to fullfill the bequests made in her will.  She was the last of the McGavock family to live in the house.

Today the house sits on a tract of 14 acres.  The remainder of the property was developed into Two Rivers Park and Golf Course in the early 1970's, with a parcel set aside for McGavock High School, which opened in 1971. 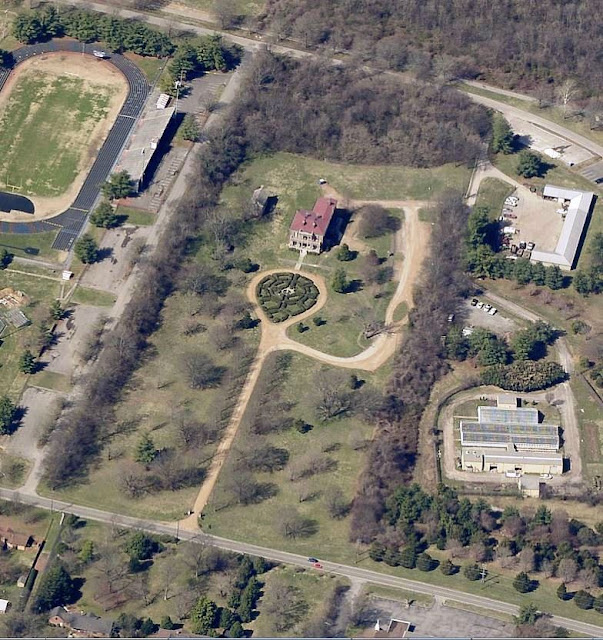 Tours are offered on Monday, Tuesday, Wednesday and Friday afternoons from 12:00 until 4:00, June through August.  Become a member of the Friends of Two Rivers Mansion before you go.  Tours and  most events at Two Rivers are free for members.  It's easy to join, online or by mail.  For more information click here - support Two Rivers Mansion

The mansion and grounds are available for use for private events and weddings.  Visit the Friends of Two Rivers Mansion website for more information on fees and availability.


Posted by Nashville History at 10:18 AM No comments: