A plat for the Oakwood Park subdivision was filed in April of 1912.  The boundaries were, on the north and south, Mile End, now Douglas Ave and Evanston.  On the west and east, is North 4th, now Lischey Ave and the railroad tracks.   It was reported in the Tennessean, in December of 1912, that 200 lots had been sold.  That was more than half the lots in the subdivision. Seven houses had been built and fifteen more were under contract.  The story reported that all saloons were prohibited from the neighborhood.

With the new year of 1913, Evanston Land Company began a campaign to sell Oakwood Park.  Ads appeared weekly for the first few months.  Lots could be purchased for "75 cents down and 75 cents per week." No interest ever, the ads proclaimed.  City water, and natural gas was available in the community.  There were nearby public schools.  Many of the lots had large trees.  Streets had been built, along with sidewalks.  And the street car line was close. By the middle of summer of 1913, the ads slowed.

A newspaper photo in April of 1913 shows one of the new houses in the Oakwood Park.   Though no address is given, this appears to be the house located at 1103 Lischey Avenue.

Finding a better way to get from the North Edgefield area to Edgefield proper was a problem from the beginning of residential development in the area.  Flooding of the Cumberland forced backwater across North First Street, then known as White's Creek Turnpike. The flood water and numerous springs, also filled in the low area of land, that is now a railroad bed and the path of Ellington Parkway.  Different solutions were sought and by the early 20th century a path from Main St. through North Seventh, hooked up with Foster Street.  It was a long way around, but was sometimes the only passable route. The trip was especially unhandy for an East Nashville resident wanting to visit the business district, located on North First Street.

Talk of a bridge across the low lying railroad gulch, went on for years. A newspaper reporter, wrote that the section was often cut off from the rest of the city. It finally became a reality in the early 1920's, when bonds were issued for what would be known as the Meridian Street Viaduct.  The bridge would be constructed from where Meridian Street intersected Spring Street, spanning the gulch and rail yards, and ending near Main Street at North Third.  Construction was begun, in 1923, by the Foster-Creighton-Gould Company.

The bridge was completed and opened for use in May of 1924. The viaduct cost 300,000 dollars. An official celebration was held on August 6, 1924, at McFerrin Park. About 500 people attended. Among the speakers was United States Congressman Joseph W. Byrns, a former resident of East Nashville.  Professor J. J. Keys, of Hume Fogg High School, hailed the viaduct "as the greatest achievement in the history of East Nashville."  Professor A. C. Webb, local artist and Superintendent of Drawing in the Nashville Public Schools presented a report on several recently completed public works projects. Both Keys and Webb, lived in Northeast Nashville.

The Meridian Street Viaduct would serve the Northeast Nashville community for many years.  I don't know the date when the bridge was demolished.  It was taken down in advance of the construction of  Interstate 65 (now designated as I-24), through East Nashville.

How Nashville's Edgefield was named.

In October of 1848, Neill S. Brown, purchased fifty two acres of land on the north side of the Cumberland River, about one mile from Nashville, on the Gallatin Turnpike. He paid 5,156 dollars in cash and an additional sum of 8,045 for the property, 13,201 dollars in total. The property was purchased from Will Foster. Some months before the sale, Foster advertised the property in a newspaper. The total acreage was 104 acres but Foster offered to divide the parcel into two equal parts. He described the tract as having a large and commodious Dwelling House, out buildings and a good spring, near the house. 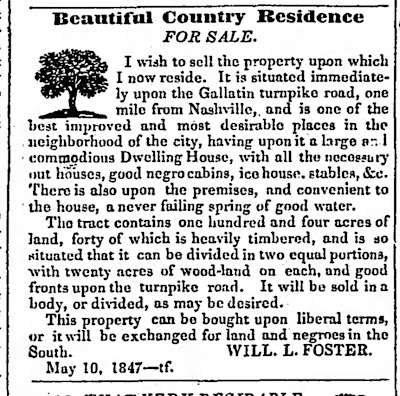 Governor Brown stated years later that he settled on the place in the fall of 1848. That statement and the purchase price leads to the conclusion that the house described in the ad was on the fifty two acres that Brown purchased.

When Governor Brown wrote in 1874, of the how Edgefield was named, he stated that shortly after he moved to the property, he met up with several of his neighbors, Dr. Pitts, General Clements and Mr. Hobson, at his spring. They spoke of the little village that had grown up near their properties and the need to select a proper name. Brown wrote, "I was called upon first. Looking over the scenery in view, and observing the graceful curve of the woods around the distant fields, I was struck with the name of 'Edgefield,' and it was unanimously adopted. This name has come on down to the present day, and will probably continue through the indefinite future."

In a published volume titled, Acts of the State of Tennessee Passed at the General Assembly, 1849-50, this entry was found. "An act to establish the Edgefield Manufacturing Company…the Commissioners shall select site, for said Manufactury, on the side of the Cumberland River opposite Nashville. Passed Dec 14, 1849."

In early 1850, there were notices in newspapers of the Edgefield Manufacturing Company but nothing about that business was found later. This is not the same as the Edgefield and Nashville Manufacturing Company that was chartered in the late 1860's. In 1850 a new bridge was erected across the Cumberland from Nashville to Edgefield. Also in 1850 advertisements offering property for sale in Edgefield began to appear. New businesses opened and the Edgefield Institute was chartered. In late 1850, Hobson's Chapel was built near the current intersection of 10th and Woodland. The people of Edgefield asked that a railroad depot be built in the neighborhood.

John Shelby, who at one time owned all of the land that would become Edgefield, was dividing his property into subdivision and selling lots. William Foster did the same with the property he owned, adjoining Gov. Brown. 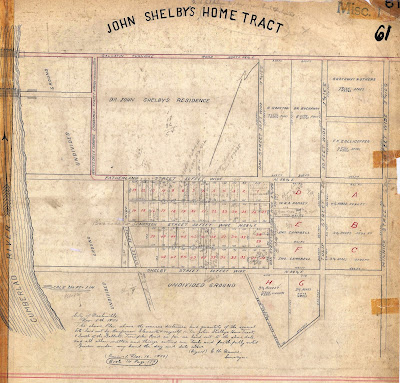 When Governor Brown wrote in 1874, that the name would continue through the indefinite future, he most likely did not realize how true his words were. In 2017 Edgefield is still a thriving, growing community, just as it was when Governor Brown moved to his home in 1848.


Text of Governor Neill S. Brown's Letter to the Editor of the Republican Banner, March 22, 1874.


To the Editor of the Banner
In the fall, of 1848, when I first purchased and settled on the place I now occupy, there, were but two houses between me and the river south of Main Street --one the residence of Mrs. Minnick, where Mr. Sheppard now lives, and the other the residence of Dr. Shelby. On the north side of Main Street, the old Nichols house stood solitary and alone, and it is still there, after all these generations. On the south side there was an unbroken forest of stately poplars and elms, still standing as they had stood in the days of the early settlements, and stretching on down to the borders of the river. North of me were the residences and settlements of Dr. McFerrin and John McGavock, separated, however, and obscured by a dense forest on my own place, but which, alas, has disappeared under the ravages of war. Beyond the premises of McFerrin and McGavock was a beautiful woods, forming a graceful crescent or circle. The whole settlement, as it was then, formed one of the most beautiful pictures I ever beheld. Art had done but little, but nature had done her utmost, and made it a most charming retreat. It was, in fact, a "lovely village of the plain." Some short time after I settled there, I met one day casually, at my spring, several of my neighbors. Among them I can recall Dr. Pitts, General Clements and Mr. Hobson. Some one, I think Dr. Pitts, raised the question of selecting a name for our village, for it was then bearing an appellation not very complimentary to its dignity. I was called upon first. Looking over the scenery in view, and observing the graceful curve of the woods around the distant fields, I was struck with the name of "Edgefield," and it was unanimously adopted. This name has come on down to the present day, and will probably continue through the indefinite future. The physical features of our town have undergone a change since that day, equal to that wrought by the hand of art. Houses and streets have usurped the place of commons and paths. A busy hive has occupied a solitude. Then I knew every inhabitant of the village. Now I do not know the fourth of them. Long may it live, and flourish, and prosper!  Neill S. Brown
(Note : Mrs. Minnick, mentioned in the letter was the mother in law of John Shelby.)


Posted by Nashville History at 12:31 AM No comments: