A dictionary defines smorgasbord as a buffet of various hot and cold appetizers, salads, casserole dishes, meats, cheeses, etc. In the southern United States, the meaning leans towards home cooking. A hot bar with fried chicken, meatloaf, ham, baked fish, and vegetables cooked slowly until they are way beyond done. A cold bar with a mix of salad greens with all the toppings and a variety of dressings, ranch, Thousand Island, French, etc. Salads might include beet salad, potato salad, pasta salad, cucumber and onion salad, carrot and raisin salad. Rolls and cornbread are a must. And finally a dessert bar, with fruit cobbler, sheet cake, a variety of pie slices and fresh fruit, And always ice cream.  Makes me hungry to think about all that yummy food. 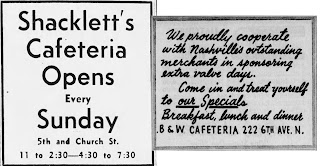 Nashville had a long tradition of cafeteria style restaurants, where customers went through the line in front of a steam table and pointed out the food they wanted and a server put it on a plate. A good variety of meats, vegetables, salads, and desserts was offered. Shacklett's on Church St., B&W (which stood for Burrus &Webber) on 6th Ave. No., and Mitchell's on Union St. were all popular places in the 40's and 50's.


The Arrival of the Smorgasbord 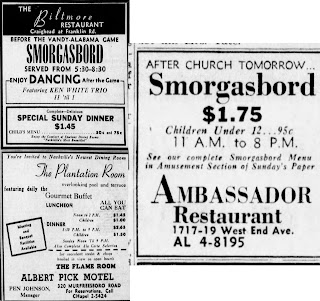 In the 1960's a new style of eating was introduced to Nashville. A few restaurants began to serve food buffet style, where customers served themselves and could go back for seconds or even thirds. In 1961, the Ambassador Restaurant on West End, the Biltmore Restaurant on Franklin Rd and the Plantation Room at the Albert Pick Motel on Murfreesboro Rd were all advertising smorgasbord, all you can eat buffet menus. They often offered fancy foods, Seafood Newburgh, marinated herring in wine, spiced crab apples, and creole eggplant along with some southern favorites. By the late 1960's a few restaurants were offering a salad bar to go along with the menu entrees. In the summer of 1971, Shoney's Restaurant installed their first salad bar in the Harding Rd. location. 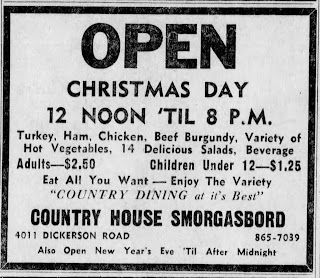 In 1971, smorgasbord in Nashville took a new turn. Orlin and Margit Prosser moved their family to Nashville from Pennsylvania. Mr. Prosser was a WWII and Korean War vet. Margit met Orlin at an Army camp where he was stationed and she was a civilian employee.  After their military years, the family settled in Pennsylvania where they began working at a large smorgasbord restaurant. It was big, could seat 1000 people and the entire Prosser family worked there. When they came to Nashville bringing many years of experience in food service Orlin and Margit were ready to own their first business. Partnering with Kenneth Franklin and family they opened the first country cooking, all you could eat, buffet self-serve restaurant, in northeastern Davidson County.  Located at 4011 Dickerson Road the Country House was immediately popular with community residents. Word of mouth brought in folks from outside the area. The restaurant proudly advertised their "country cooking." Country House was in business until the late 1970's.

In 1975, the Prosser's decided to open a restaurant of their own. They located a place in Hermitage, Tennessee and opened Hermitage House in May of 1975 at 4144 Lebanon Rd. It was truly a family business with each family member having a role. Customers loved the fried chicken and apple fritters. There were many loyal customers from day one who patronized Hermitage House for many years. The Prossers became a vital part of the Hermitage Community.

After 20 successful years, the Hermitage House moved to a new location at 3131 Lebanon Road. Many customers followed the Prossers down the road to the new place. Over the years new people have discovered Hermitage House. It has been a favorite in some families for several decades now. Hermitage House is still serving food there in 2018. After more than 45 years in business, the menu has not changed a lot and the recipes are some of the ones that Orlin Prosser created years before. Mr. Prosser passed away in 2001. The family carried on, continuing to serve good home cooking.  Mrs. Prosser will celebrate her 90th birthday in November. On cold days there is a fire roaring in the fireplace. Plenty of fresh food and attentive service in the dining room. A visit makes one think of visiting grandmother's house for Sunday dinner. You can find Hermitage House on Facebook. 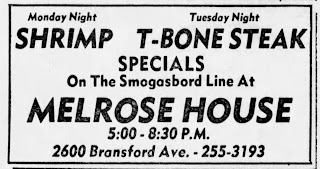 Melrose House Smorgasbord was opened in 1974 at 2600 Bransford Ave. Kenneth Franklin and family, of Country House, partnered with Frank Cleaver and family to open the restaurant. Melrose House had 12 dining rooms. A menu with steak and seafood was offered as well as a southern country style smorgasbord of meats and vegetables. Melrose house had room for private parties large and small and also offered catering. It sat high on a hill above Woodlawn Cemetery. The name came from an old mansion that had stood on the site. Raymond Ligon bought the old house in 1950 and dismantled it. He built a new house on the property. It was in this newer building that Melrose House Smorgasbord opened. In April 1975 Melrose House burned. It was rebuilt and reopened later that year. In 1980 there was another fire and Melrose House closed. 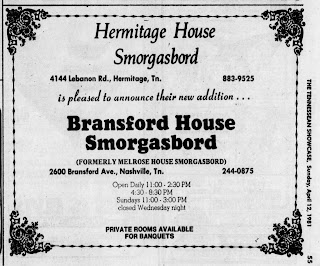 Bransford House opened in May of 1981 in the same building that had been occupied by Melrose House. Mr. and Mrs. Orlin Prosser, owner of Hermitage House and former part owners of Country House had ventured out and started Bransford House. The Prosser's redecorated with a country theme and offered country cooking at their new restaurant. Taking care of two businesses may have have been too much for the family. Though seemingly successful the Bransford House closed by the late 1980's. The Prossers turned their attention back to Hermitage House.

All of these restaurants hold good memories for many Nashvillians. Some continue adding to the memories by visiting Hermitage House on Lebanon Rd. and savoring some old Prosser family favorites.

Posted by Nashville History at 9:14 AM 3 comments: