Inglewood - Just where do we live?

I wrote this in response to a question on the Inglewood listserve awhile back. A newcomer to Inglewood was confused by all the names that can be applied to the area and asked, "Just where do we live." it's sort of jumbled, with little editing, but I decided to share. 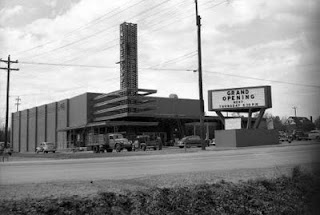 There are a lot of answers as to where we live. When we pay our taxes, it's Davidson County. If the house is on fire, the Nashville Fire Department responds. If we call the police they consider us East Nashville. Mayor Purcell heads up Metropolitan Nashville and Davidson County. When we pay our water bills, some of us send the money to Madison Utilities. Maplewood is an older name than Inglewood. Inglewood has been used for about 100 years, starting with the subdivision of the area around Inglewood Kroger. It is the right of any Inglewood resident to say he lives in East Nashville, or just Nashville, if he so chooses, but please don't forget the history of why it was called Inglewood in the first place.

The first town in the vicinity was Haysborough, chartered in 1799. It was located on the river bluff in back of where Springhill Cemetery is today. Much of Inglewood proper was the Williams place. On the East side of Gallatin at McGavock was the Maxey farm. Just north on the west side was the homeplace of Thomas and Martha Martin. The Maxey family graveyard is shown on a plat as being on what is now the southside of McGavock Pike about halfway between Gallatin and the railroad. Just about where the large grassy areas are between the street and the sidewalk. The Stull plantation was on the other side of Gallatin in this area. Stull's land ran south from Trinity Lane, all the way to where Nashville Auto Diesel College is now. Stull descendants built the historic house on the NADC campus that was later the home of Warner family of Warner Parks fame. The house was also used for Trevecca Nazarene College at one time. Near the East YMCA was the farm of Isaac Litton, who born in Ireland, became a wealthy landowner after settling in Nashville. You will find the memoir of Judge Litton Hickman, grandson of Isaac Litton here - http://freepages.history.rootsweb.com/~nashvillearchives/hickman.html).

Hickman described his neighborhood as "a very well defined one, extending from Tenth Street in East Nashville out the Gallatin Road to the Madison area. It was a distinct unit, apart from Edgefield on the one side and open country on the other." Hickman graduated from Vanderbilt in 1896 and was a practicing attorney in Nashville by the time Inglewood was developed. Back when there were county and city government Hickman served as county judge equivalent to county administrator. When the two were combined our Mayor's office was changed to more of a county administrator than the a municipal mayor.

Jere Baxter purchased land and a house from the Williams family on the West side of Gallatin Road. Baxter owned land from the Hart Lane area out to about Maplewood Lane. It was Baxter who gave the name Mapelwood to his farm and his home, which stood at the end of what is now Curdwood. We all know about Evergreen and the Craighead family who lived on that land. The Bradford family lived at Evergreen for many years. Just north beyond Evergreen was Glen Echo, built by Rev. Craighead about 1790 and occupied for many years by Emily Donelson Walton and her family. The Love family, and later the McGaughey's, owned much of the land where St. Joseph's Church and Springhill Cemetery is now and their property ran south to the Haysboro, Brush Hill neighborhood. The Riverwood neighborhood where I live, is made up from several old farms. The first being Riverwood, the land of which covered the south section of Riverwood, along Cooper Lane and Sandy Dr and McGinnis and that area. Brothers, Aaron and Jonathan Strech, had adjoining farms that covered the present streets of Milton, Avalon, Ivy, Fremont and some of Moss Rose. The restored 1855 homeplace of Aaron Strech, still stands on Warden St between Avalon and Moran.

Community names come from families, streets, subdivisions, rivers, creeks or sometimes just from the imagination of the residents. Community names can change over time. Donelson was first called Slip Up and later McWhirtersville. With the integration of neighborhoods, those communities that were traditionally African American have blended in with the surrounding area and the names and history of most are gone or will be with the last of the old folks. I hope we don't lose more. I'm writing it down as fast as I can.

Inglewood - Just where do we live? by Debie Oeser Cox is licensed under a Creative Commons Attribution-NonCommercial-NoDerivs 3.0 Unported License.
Posted by Nashville History at 8:56 PM 2 comments:

Many people think that Dr. John Shelby was the original owner of all of the land that comprises East Nashville, including Shelby Park. Shelby's father David, purchased a 640 acre tract from James Shaw[1], who had received a preemptor land grant from North Carolina. Early pioneers were granted land, called preemptor grants, for settling the land and for protection of the settlement. Shelby's tract was bound on the west and south by the Cumberland River, and roughly on the north by Main Street and on the east by 8th/9th Streets. Most of the old City of Edgefield was on Shelby's land. He gave this land as a gift to his son's, John and Anthony Shelby. The northern portion of Edgefield, across Main Street, known today as Northeast Nashville, had been the land of David McGavock[4]. The area was bound by the river along Dickerson Road to Douglas Ave., then east to just across Ellington Parkway and then back south to Main Street.

As the community grew eastward, toward today's Lockeland neighborhood and Shelby Park, the original land grants of Daniel Williams[11], Turner Williams[12] and William Overall[13] became a part of East Nashville. Lockeland School is on the site of a log fortification known as William's Station. Daniel Williams, Sr., who was granted 640 acres by North Carolina, was appointed as the first sheriff of Davidson County in 1783. Shelby Park proper, is laid out over a portion of the land of Daniel[11] and Turner Williams[12] and William Overall[13]. Shelby Bottoms is on land originally surveyed for John Rice[26], William Murray[21] and Green Hill[23]. Though Shelby Park's land was never owned by Dr. John Shelby it was named for him, as was Shelby Avenue. He had been one of the area's most well known and respected residents.

Robert Weakley purchased Daniel William's property and David Vaughn bought the land of Turner Williams early in the 19th century. Descendants of both men lived in the area, for the next 100 years. Eastland Avenue was once the lane to the Vaughn property and was known as Vaughn Pike. The Lockeland neighborhood took it's name from the home that was built by Robert Weakley in 1810. Weakley named his home in honor of his wife, Jane Locke Weakley, and her family.

Northeast Nashville is west of Gallatin Pk. and north of Spring St.  The area includes the McFerrin Park, Cleveland Park and Highland Heights communities and the area north to Trinity Lane.   David McGavock[4 and7] was an early land owner, along with Martin Armstrong[5], Haydon Wells[6], Issac Lindsey[5A], and Zachariah Stull[8]. You can read more about McGavock's property by clicking here.  Armstrong was a surveyor and owned land across Middle Tennessee.  Haydon Wells and Isaac Lindsey settled for awhile at Heaton's Station, located at the today's Lock One Park.  Zachariah Stull built a log cabin on the west side of Gallatin Pk, a good distance from the road, near Carolyn Avenue.  His property ran out to near Trinity Ln.

Torward the east side of Gallatin Pk and north of Shelby Park lay the grants of James Sanders Sr.[15] William Carvin[16], John Evans[17], and Sampson Williams[17A].  This land comprises most of the Inglewood and South Inglewood communities.  Carvin was an early casualty.  He was working in a field on his land, in August of 1780 when he was attacked by Native Americans. His wife, at their nearby camp, heard the gun shots and hid in tall cane with her three small children. After dark she made her way toward the Bluff Station at Nashville.  Read more about the history of Inglewood here.  To the south and north of Briley Pkwy on both the east and west sides of Gallatin Pk was the land granted to the heirs of Alexander Buchanan[18].  Buchanan was killed at the Battle of the Bluff at Nashville in 1781.  His grant was claimed by his brother Major John Buchanan and later was the property of the first preacher, to settle in Davidson County, Thomas Craighead.  Much of the property today is covered by Spring Hill Cemetery.  William Cocke[18A] was the grant holder of the land east of Spring Hill Cemetery that runs along the Cumberland River.  This soon became the property of Robert Hays, brother in law to Andrew Jackson.  It was on this land that the town of Haysboro was built.  James Scott[18B] was the owner of the northern most grant on the map. 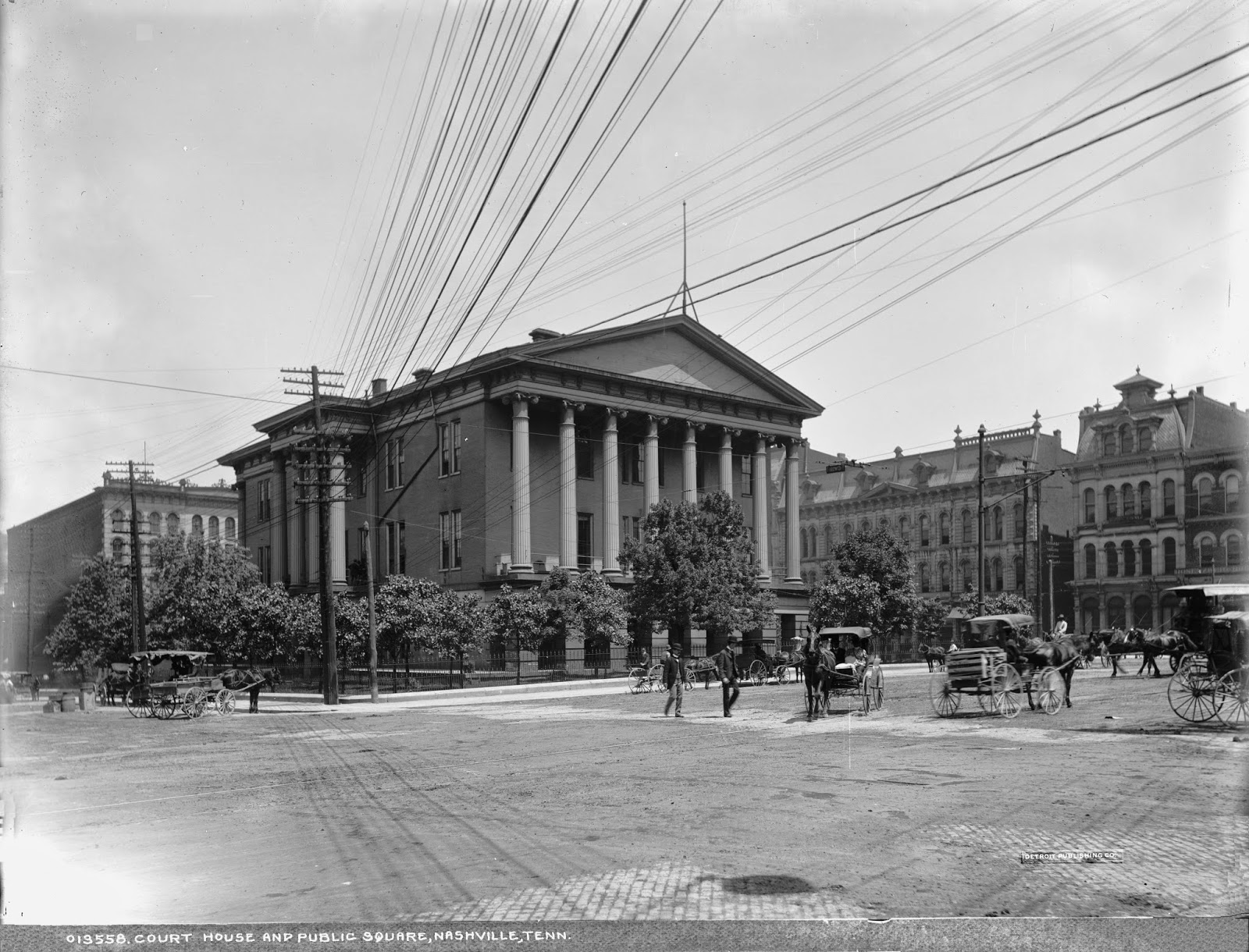 This image of the Davidson County courthouse and Nashville's public Square was made about 1900. The original can be found on the Library of Congress website in the Detroit Publishing collection.  The photo may be downloaded from that site and there are no posted restrictions on use.  If you copy and post elsewhere please credit LOC: Detroit Publishing (http://www.loc.gov/pictures/collection/det/item/det1994014652/PP/) 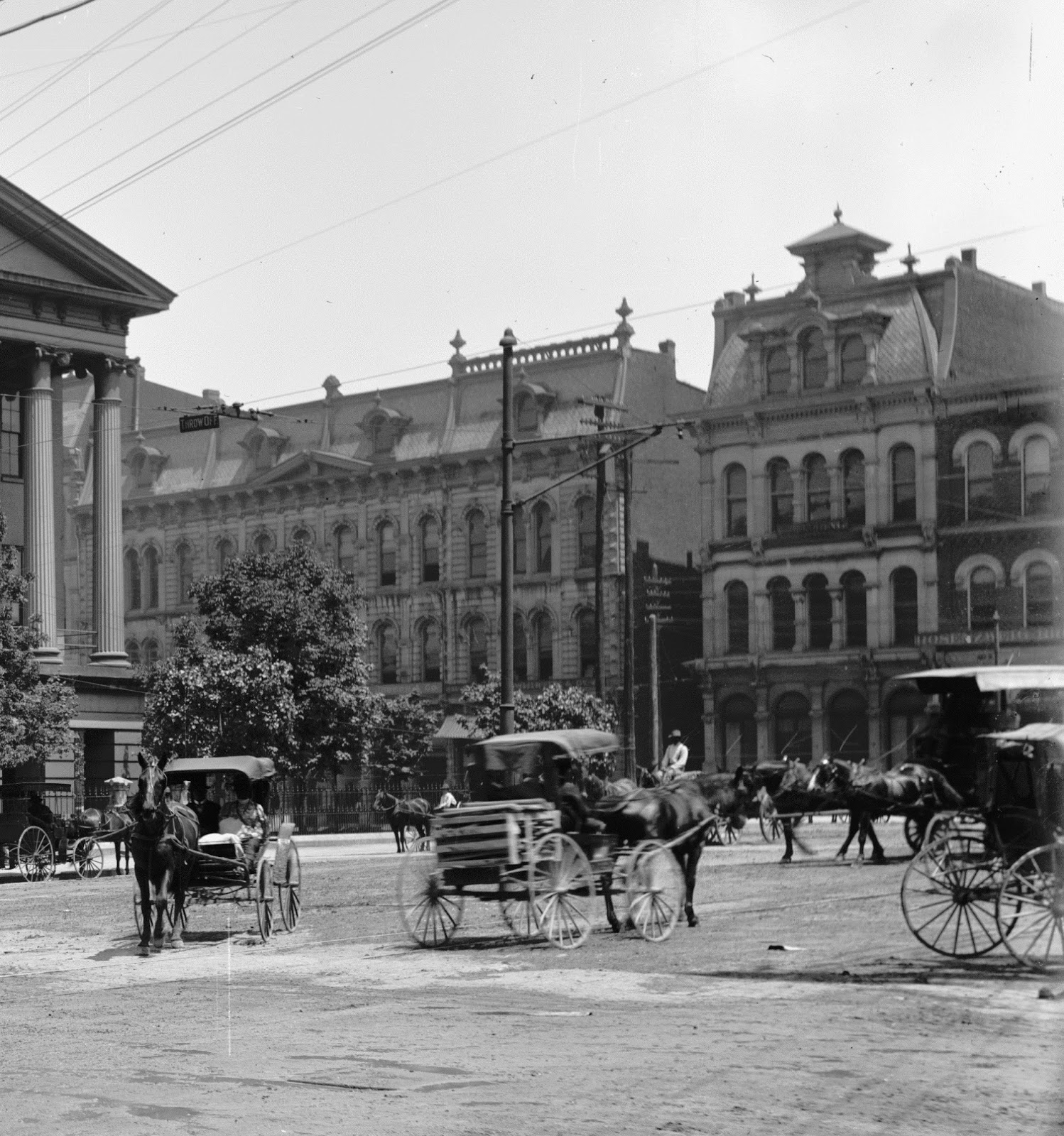 The east side of the square is visible to the right of the courthouse. 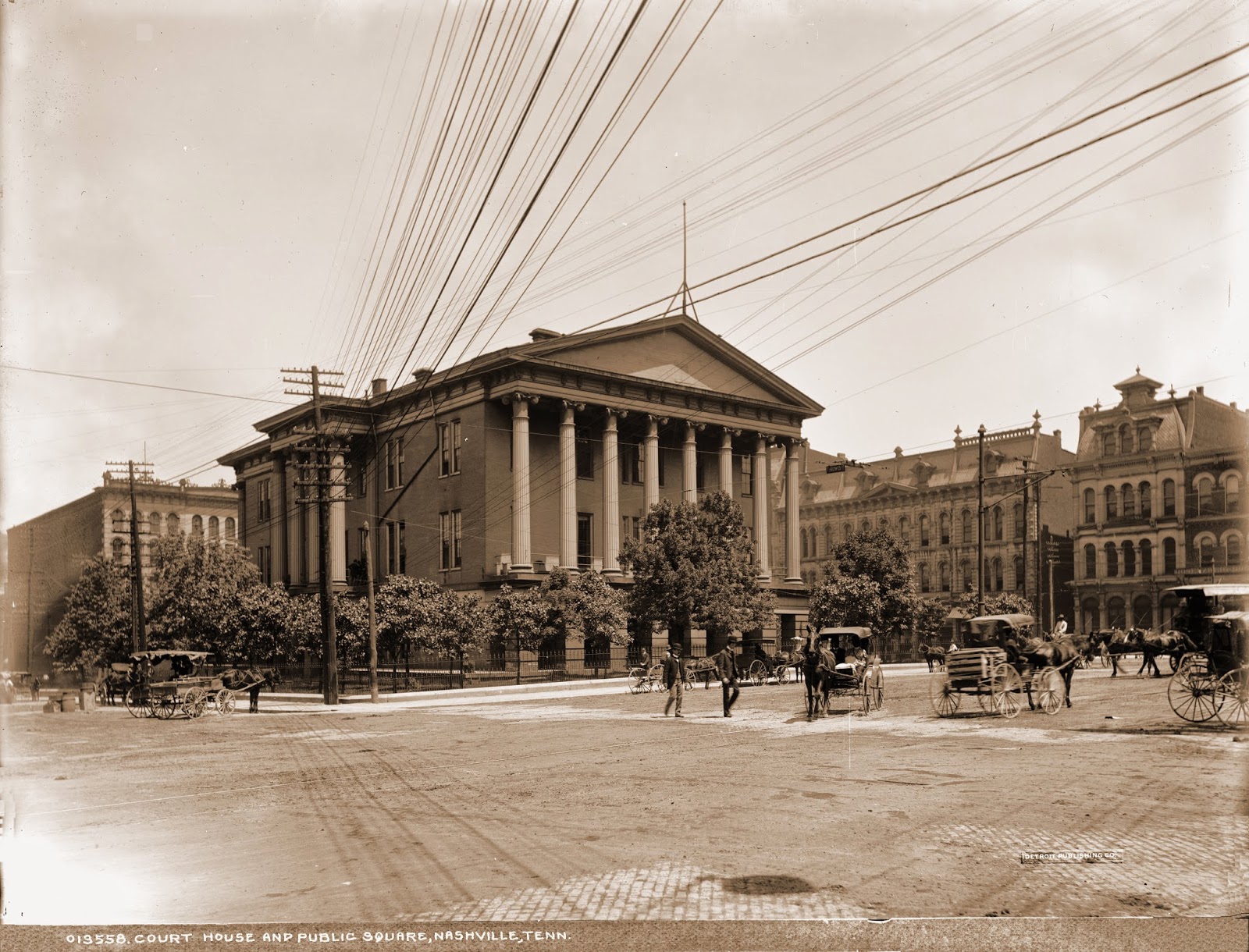 The original photo was enhanced and changed to sepia with photo editing software.

Posted by Nashville History at 12:54 PM No comments: 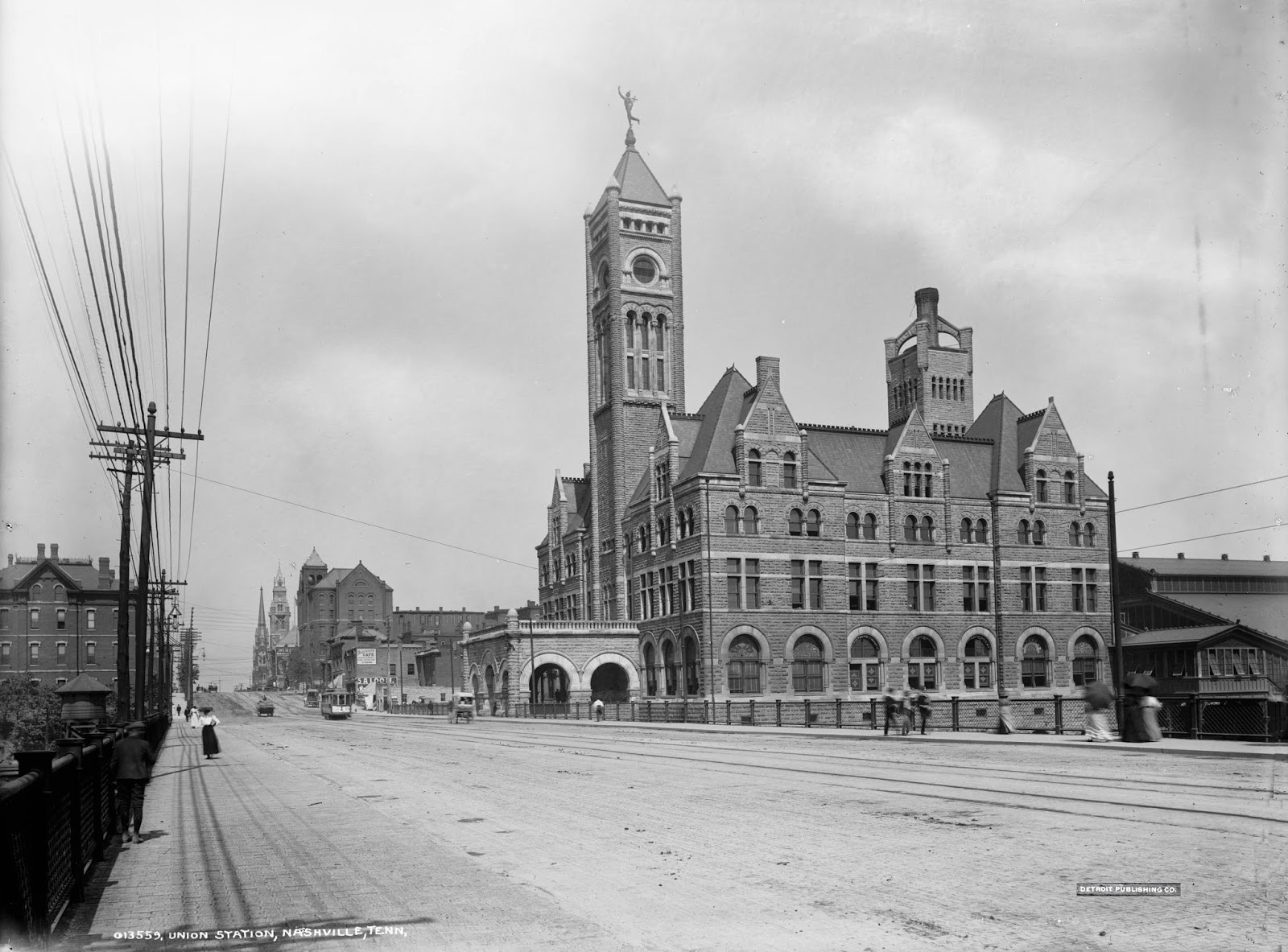 This wonderful image of  Union Station was made about 1900.  The original can be found on the Library of Congress website in the Detroit Publishing collection.  The photo may be downloaded from that site and there are no posted restrictions on use.  If you copy and post elsewhere please credit LOC: Detroit Publishing (http://www.loc.gov/pictures/collection/det/item/det1994014653/PP/) 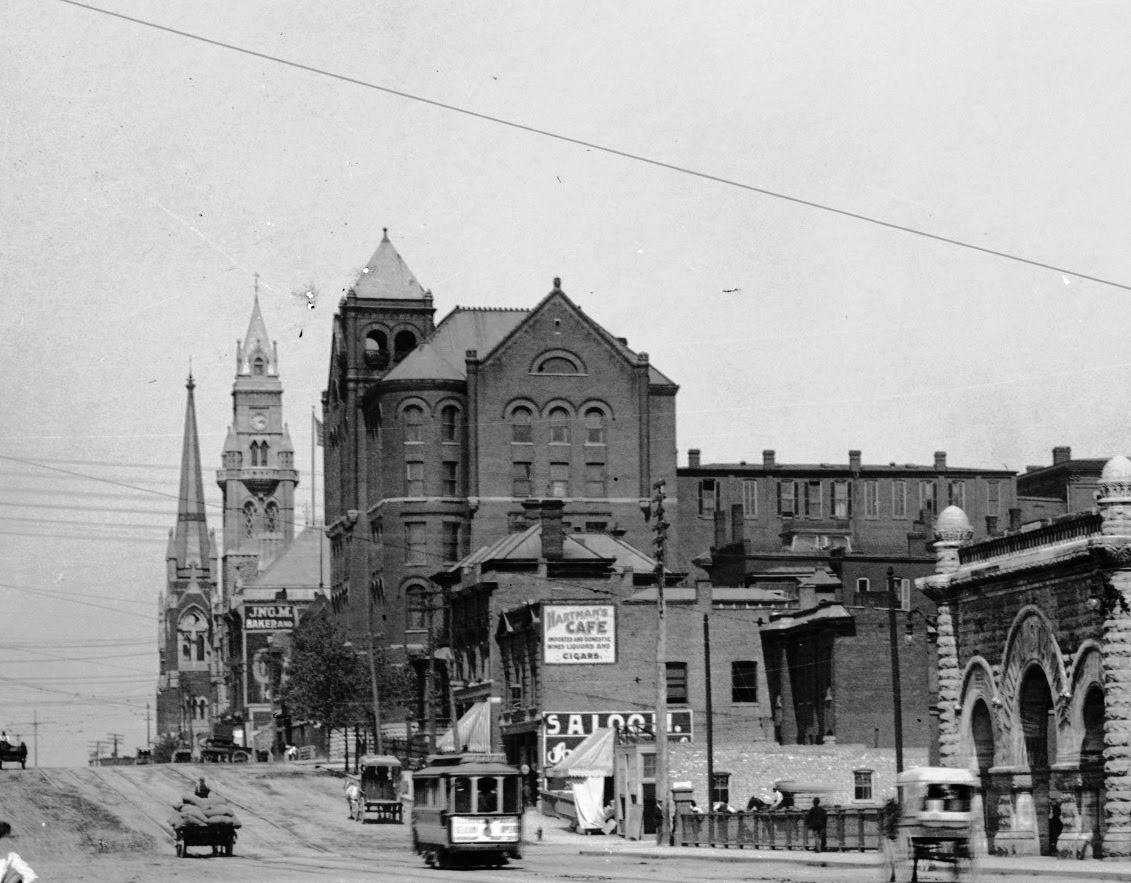 A close-up of the background from the original photo.  The Vauxhall Apartments, the Customs House and First Baptist Church are visible.