Out at the edge of old Northeast Nashville, at 1606 Lischey Avenue, is an old two story, Queen Anne style house.  When I was growing up, the big white house was known as the Tony Sudekum house.  While working with Bill McKee, when he was writing a history of that area, North Edgefield Remembered, I learned that before Mr. Sudekum the home had belonged to a Judge Allen.  Bill McKee assigned certain sections of the book to his current and past students for research.  One wrote about the Judge Allen house.  However the researcher put the "wrong" Judge Allen in the house.  The researcher described the house as being built by Judge Matthew Allen of Davidson County.  As it turns out, Matthew Allen had no connection to the property or the house.

A few years ago, when researching houses in that area, I decided to make a deed search for the Allen house.  It was not an easy search, with many roadblocks, and for a while I didn't think I was going to be able to associate anyone of the name Allen with the property.  And then I found a record that told all.

In January of 1900, Judge John Tidwell Allen, filed a document with the Davidson County Register of Deeds Office, naming himself trustee of several properties.  The properties were to be for the use and benefit of his wife Ellen E. Allen and of their children; Houston Thomas Allen, Mary Lou (Truett), Clifford Robertson Allen Allen, Mildred Allen (Dorfner), Daisy Allen (Robb) and John T. Allen, Jr.  Judge Allen, states that his wife, Ellen is insane and he reserves all right to sell, or transfer property in the future.  He describes the property as, "lots number 5 & 6 in the Trinity Heights addition in the subdivision of the Bass lands in the 17th district…"  The Bass lands were from the partition of the William White lands. The document goes on, " said lot five being one hundred feet front and lot six being one hundred and six feet front and both lots being one hundred sixty five feet depth, bounded on the north by Marshall Avenue on the East by Lischey Avenue, on the south by lot No. 4, on the west by an alley, the same being the property on which said Allen is building a new residence which is newly completed…."  The document was signed by John T. Allen on January 4, 1900.

So there we have it. Judge John T. Allen built the house at 1606 Lischey Avenue with construction likely beginning in 1899 and completed in early 1900.

John Tidwell Allen was born February 17, 1852, in Maury County, Tennessee, son of Berryman and Damaris Tidwell Allen, both natives of Tennessee.  John Tidwell Allen was educated in the country schools near his home.  He furthered his education under the private tutelage of Dr. William Stoddard who was one of the founders of Lynnville Academy.  Allen studied law in the offices of W. C. Whithorne and Houston Thomas in Columbia, Tennessee.  He was licensed to practice law in January of 1875.  He struck out on his own and set up practice in Waynesboro, Tennessee.  After a short time he relocated to Lawrenceburg, Tennessee. During this period, he married Ellen Wilkenson of Giles County. Though her formal name was Ellen, she was called Ella by those who knew her and often appears as Ella in public records. Mr. Allen was busy man.  Soon after their Ella, the couple moved to Pulaski in Giles County and John T. Allen became a law partner of Edwin T. Taliaferro. In the years, that the family lived in Pulaski, John T. Allen was elected and served as mayor of the town.  He served for many years on the board of Martin College.  He was appointed to serve as a Justice, on the Tennessee Supreme court, when Judge John S. Wilkes became ill for a time.

In 1899, Judge John Tillman Allen moved to Nashville, joining the firm of Washington, Allen and Rains.  His partners were W. H. Allen and J. Percy Rains.  He had purchased the property on Lischey Avenue, prior to his move, in April  of 1897.  He purchased a total of 40 lots in the Trinity Heights subdivision, including the lots five and six, on which he later built his home,

In August of 1910, Tony Sudekum and his wife Nettie bought lots the house lots, five and six and another nine adjoining lots in Trinity Heights.  Tony Sudekum was well know in Nashville.  He and his father Henry, opened some of the first movie houses in Nashville.  They owned Crescent Amusment, Union Ice Cream Company, auto dealerships many other businesses.  The Sudekums lived in the house until 1919 when they sold the property in February of that year to William Henry Dammons.

In 1920 Dammons sold the house to Ora Redd Wakefield.  Wakefield sold the house in Oct of 1922 to Mrs. W. C. Hagan and Mrs. Ella Lemon.  Hagan and Lemon sold the house lots, five and six, and nine adjoining  lots in August, 1926 to Sam A. Buchanan.  Shortly after purchase, Buchanan re-subdivided the eleven lots, into twenty lots, combining lots 4 & 5 of Trinity Heights and renaming it, as lot 1, in the Buchanan subdivision.

When you look at the property today, the address, 1606, is lot number one, of the S. A. Buchanan re-subdivision, of many number of lots, including lots five and six of the Trinity Heights subdivision. The property description in the Allen document, leaves no doubt as to the location.  In the early days, there was no street number, as the property was on rural route.  When street numbers were first given that far out, 1600 was the designation for the house.  It was the only house on the west side of the street in that block, for many years.  For a time the house was used as a sanitarium and a rest home for the aged. My great grandfather, Felix Z. Hunt, died there in 1942.

In the 1960's and 1970's, a Mrs. Carter owned the house.  She had ran a private, facility/home for mentally handicapped and aged persons.

A bit more about Judge Allen and family.  After selling the house on Lischey, the family lived for a while on Meridian Street on lots that the Judge purchased in 1897.  Judge Allen moved to Sumner County after he retired in the mid 30's and lived at Hendersonville.  He died after a short illness at the Madison Sanitarium, on Februray 6, 1942.  His sons all became lawyers. Houston Thomas Allen, the oldest son, gave up law to become a Methodist minister.  His middle son Clifford Robertson Allen gave up law for the insurance business, moved to Florida and was president of Our Home Life insurance Company, later moving to Washington D. C. with his company. Youngest son John T. Allen, Jr., was an attorney in New York

Clifford Robertson Allen, Jr., grandson of Judge Allen, was born and reared in Florida but came to Tennessee to attend Cumberland School of Law.  He stayed to practice law in Nashville.  Allen served as Davidson County Assessor of Property.  He represented Davidson County in the State Senate and later served as a Representative in the U. S. Congress.

Posted by Nashville History at 4:38 PM

For those who grew up on the north side of the Cumberland River during the 20th century, in East Nashville, Inglewood and Madison,  the name Montague is familiar.  Most everyone remembers weekend nights in the 50's, 60's and 70's that were spent at the Montague Drive-In Theater.

In the 50's and 60's, there were several businesses along Gallatin Road with Montague in their name.  Montague Pharmacy owned by David Elder, the Montague Barber Shop and Montague Market were busy neighborhood businesses. 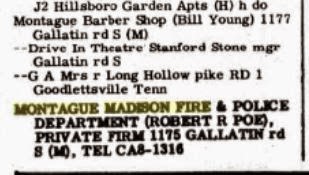 The Montague - Madison Fire and Police Department owned and operated by Robert Poe provided protection for the community.  The heart of Montague was in the residential neighborhood, where children rode bikes and played ball in the streets.

The first plat for Montague was filed with the Register of Deeds in Davidson County, Tennessee, in March of 1919.  Several Montague plats followed, with a total of eight Montague plans.  All plats,  including Montague Park, Montague Falls and Montague Valley of Rest, were re-subdivisions of the some part of the original Montague plan.

The was subdivision is said to have been named for Montague Sutton Ross, a Nashville attorney.  Montague was one of the owners of Montague Realty Company.  A biographical sketch of Ross, which appears in, Tennessee the Volunteer State 1769–1923, states;

"He is a sagacious, farsighted business man and is one of the owners of the Montague Realty Company, which is operating on an extensive scale, while he also aided in organizing and promoting the Montague summer resort, which is situated near Nashville."

Charles and Cecil Ross were brothers of Montague S. Ross.  Judge Hugh Anderson and Thomas McCorrey were law partners in a Jackson, Tennessee.  Charles Coggin was in the real estate business, in Nashville, for many years.  Nothing has been found about J. E. Smith. In 1919 the company acquired about 190 acres of land, on the banks of the Cumberland River, in Davidson County.  The land was bound by Gibson Creek and the Love property on the north and south and by Gallatin Road and the Cumberland River on the west and east.

The first streets in the subdivision, listed on the May 1919 plat, were Belle Camp Highway (E. Due West Avenue), East Palestine Blvd., Brinkhaven, Fernbank Avenue, Milliken Bend and Liberty Circle.  In July 1919, Grapevine, Bluegrass and Beach Avenues were added. In September of 1919 Fall Avenue is shown as a private drive in the Montague Falls Sub. Redbud was added in 1931.  In 1934, Goldilocks, Cinderella and Peter Pan Streets were added.

Red O'Donnell was a popular columnist for the Nashville Banner.  Red lived in Montague and often made some humorous mention of the neighborhood in his "Round the Clock," column.

In the 21st century, there are many differences.  The drive-in theater is gone, along with Montague Market and Montague Pharmacy.  Montague is place of good memories for many.   Today Montague is a changing neighborhood, home to longtime residents and newcomers alike, awaiting the next chapter.

Click here- The Montague Millennium -to read more about Montague.

Montague by Debie Oeser Cox is licensed under a Creative Commons Attribution-NonCommercial-NoDerivatives 4.0 International License.
Posted by Nashville History at 11:34 PM