A Bridge By Any Other Name, Shelby Avenue


East Nashvillians have long held the belief, that the Shelby Avenue Bridge, belonged to East Nashville.  The bridge, that we knew and drove and walked across, is much changed. Even so it will always be the Shelby Avenue Bridge to many. There was disagreement, even as preparations were made to open it, as to how it should be named.  Sparkman Street and McGavock Street were popular suggestions. 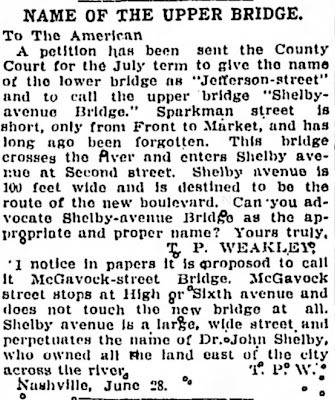 An abstract of the above news article was sent to me in June of 2012, while I was working at Metro Nashville Archives, by a patron, John Zuccarello.

T. P. Weakley writes as follows:
"A petition has been sent the County Court for the July term to give the name of the lower bridge as "Jefferson-street" and to call the upper bridge "Shelby-avenue Bridge."  Sparkman street is short, only from Front to Market, and has long ago been forgotten.  This bridge crosses the river and enters Shelby avenue at Second street.  Shelby avenue is 100 feet wide and is destined to be the route of the new boulevard.  Can you advocate Shelby-avenue Bridge as the appropriate and proper name?"....."I notice in papers it is proposed to call it McGavock-street Bridge.  McGavock street stops at High or Sixth avenue and does not touch the new bridge at all.  Shelby avenue is a large, wide street and perpetuates the name of Dr. John Shelby, who owned all the land east of the city across the river.
T. P. W."

The bridge was opened to traffic on July 5, 1909 and was officially named on that day, as the Broadway Bridge.  The name did not take.  Eventually the sentiment of East Nashville residents, won out and the structure became popularly known as the Shelby Avenue Bridge. 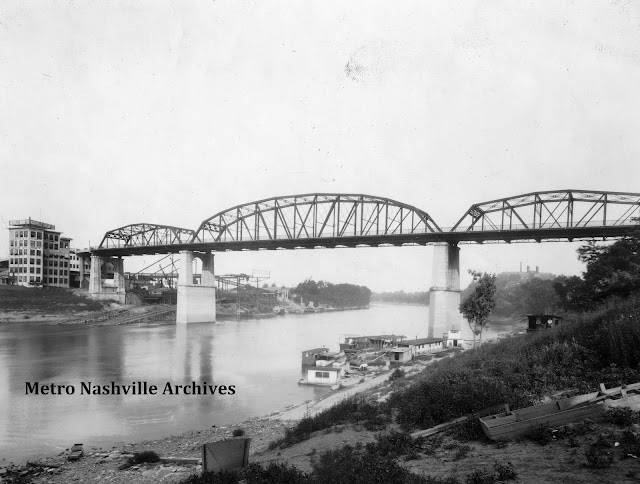 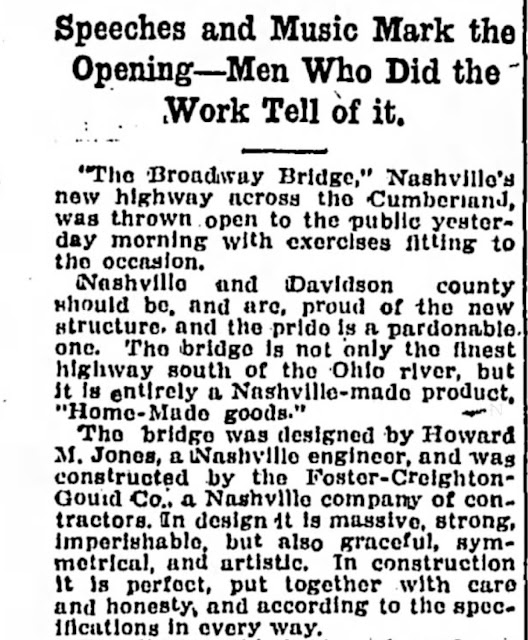 The Shelby Avenue Bridge was closed in 1998.  Both the East and West approaches were demolished and reconstructed, and now fall short of the original landings. On the downtown side the bridge ends at 2nd Avenue, rather than 4th Avenue, where it originally ended.

In 2003, research conducted by staff members at Metro Nashville Archives, did not find any evidence of an official name change from the 1909 designation as the Broadway Bridge.  The research was in response to a question of a Tennessean staffer.

The bridge reopened in 2003 as a pedestrian bridge.  In 2014 the bridge was renamed John Seigenthaler Pedestrian Bridge in honor of the well loved, Nashville journalist and newspaper publisher.

Early Roads and Forts in the Cumberland Settlements

Stone's River Station (3.) was abandoned soon after it was established, with some of the inhabitants going to Freeland's and others to Mansker's.  Fort Union (8.) was also abandoned, by June of 1780.  In the late summer of 1780, fear of Indian attacks, caused the settlers at Asher's (6.) to pack up and move to Mansker's Station. The same fate met Bledsoe's Station, though it was taken up again about 1783.

The Bluff Station, Freeland's, Heaton's and Mansker's survived the early years of the settlements, as in April of 1783, the Committee of the Cumberland Association ordered that officers be chosen for each station for safety.  The named stations at that time were Nashborough Station, Freeland's Station, Heatonsburg, Mansker's Station and Maulding's Station.  Maulding's/Maudin's was north of Mansker's near the Kentucky line and was established after May of 1780 as it is not mentioned in the Cumberland Compact. Heatonsburg was at a different, but nearby, location from the old Heaton's Station.


The first roads through Nashville and surrounding area were trails, made by buffalo.  Though the correct term is bison, everyone calls them buffalo.  These trails or traces, were often several feet wide and tramped down over time.  This area was heavily forested and where there were no trees, cane grew so think, that it sometimes could not be penetrated.  The large number of buffalo in this area kept the trails clear of cane and of trees and often offered the only path to travel through. As pioneers moved into what is now Davidson and Sumner counties, these trails became a important as a way to move between the forts and stations in different parts of the settlement

Prior to the creation of Davidson County, the Committee of the Cumberland Association met to take care of local business.  In April of 1783, the committee made a motion to lay out the first official road in the settlement, to run from Nashville, north to Manker's Station and from Mansker's Station.

Davidson County was created by the North Carolina Legislature in April of 1783 and by October the duties of the Cumberland Association were turned over to the newly created Davidson County Court.  In the first days after the court was established on October 7, 1783, the road from Nashville to Manskers was ordered by the court.  The next road ordered, in October of 1784, followed the path of the current White's Creek Pike. By the end of 1786, more than a dozen roads had been ordered to be layed out.  A person was named by the court, to determine the best path for the road, from point to point. The court ordered those persons who lived and owned land along the road, or that would be served by the road, to provide labor.  The road hands would help level and widen the roads that followed the old buffalo paths. Trees were cut and stumps removed.  Following is a list of roads mentioned in Davidson Court minutes from 1783 through 1786. Most of the early roads went north of the Cumberland River.

(p. 126) Apr 1785 – Road to be laid off from Dry Creek to Bledsoe's Lick. Capt Mansco and Ed Hogan to lay off road from said creek to Station Creek. George Mansco from Station Creek to the Lick.  Inhabitants from ridge between Mansco and Drake work on lower part; those above on upper part.

(p. 133) Jul 1785 – Isaac Johnson and John Cockrill to lay off road from John Fletchers Lick to Nashville. William Collins to oversee the clearing out road & call together for that purpose inhabitants at John Cockrills and on the waters of Richland Creek.

(p. 133) Jul 1785 – James Bosley and Elijah Robertson to lay off a road from Nashville to John Barrows ferry; John Bosley to oversee the clearing out of the same.

(p. 133) Jul 1785 – Jas Martin and Geo Frazer return they laid off a road from ridge above Frederick Stumps, past Thomas Cox. Wm Mitchell, John Frazer, (p. 134) Wm Loggins, and thru part of the clear lands of the old station, leaving Hoopers to the south. Wm Loggins & Haydon Wells to oversee the clearing of the same. Wells from Rays cabin; Loggins from that to the ridge.  Inhabitants below the road leading from Nashville to Mansker, and from the head of White Creek to the mouth work on the same.

(p. 139) Jul 1785 – John Phillips and Jacob Pennington to lay off a road from Manskers Station to William Grimes on Richland Creek.  Bazzel Boren to oversee the clearing out of said road.

(p. 140) Jul 1785 -  Frederick Stump and Wm Ramsey to lay off a road the nearest and best way from John Barrows ferry.  David Rounsevall to oversee the clearing out the said road

(p. 155) Oct 1785 -  Ordered John Rains and John Buchanan to lay of a road from John Mulherin's to F. Armstrong's mill; report to ensuing court. William Ellis and Bradley Gambrel to oversee clearing out of same.

(p. 166) Apr 1786 - Isaac Titsworth, Benjamin Drake, and Jacob Pennington report they laid off a
road from the mouth of the river to Maulden;s old station, supposed to be 25 miles

(p. 166) Apr 1786 – Sam Handley, Moses Winters, Wm Gilkison, and Caleb Winters to lay off a road from Shaw and Barrow Road where they come together on Whites Creek to ford of Sycamore, to Moses Winters, to Red River; make return to ensuing court.

(p. 170) Apr 1786 – Ordered John Drake and Isaac Rounsevall to lay off a road from Barrows ferry to the ford of Sycamore.

Thanks to Paul Clements, for helping me to confirm and add to my recollections of this time.  I often check with him when I need help with early history.  I use his wonderful book, Chronicles of the Cumberland Settlements 1779 - 1796, on an almost daily basis.

You can view and download the 1871 map of Davidson county  at this link.