A few years ago I wrote about the Nashville Public Square and the changes that had taken place in the 20th century.  The buildings that formed the four sides of the square were all demolished by the early 1980's, with the exception of one.  The Ben West Municipal Building, built in 1937 as the new Nashville Market House remains, along with the 1937 Davidson County Courthouse, in the center of the square.

The Morgan-Reeves building, which stood on the north side at 208-210 Public Square North, may have been the oldest building on the square, in the latter half of the 20th century. Many Nashvillians remember the structure, which stood until 1975. Originally called the Morgan building, it became known as the Morgan-Reeves building in the 20th century, because of the long term occupancy of the J. S. Reeves Co.


Although modern published accounts of the Morgan-Reeves building, state it was built after the fire of 1856, recent research has shown that it was actually constructed in 1854/55.  The address of the building was originally No. 49 Public Square.  The numbering system used on the public square was changed over time and by the 20th century the address was 208-210 Public Square.

The building was owned by Nashville merchant Samuel D. Morgan.  Construction had begun by June 16, 1854, when an article appeared in the Daily Union and American, detailing the plans for the building.

"The building is 180 feet deep by 42 feet in width and five stories high, including a well lighted and fully furnished basement story… The style of architecture is Corinthian, as is the finish of the main story, or sales room… The entire height of the building is 67 feet above the pavement in front, and 76 feet in the rear. The principal rooms are to be finished in magnificent style, with elaborate cornices, &c. The whole extent of the floors is 43,200 feet, or just above an acre.  There are used in the construction of the building between 600,000 and 700,000 bricks, 2835 joists, and 2160 feet of large girders.  A large amount of cast and wrought iron is used with other building materials corresponding with the quantities given.  The architects are WARREN & MOORE…The house is an ornament to the public square…."

The building was completed by the late summer of 1855, when the advertisements began to appear in newspapers. 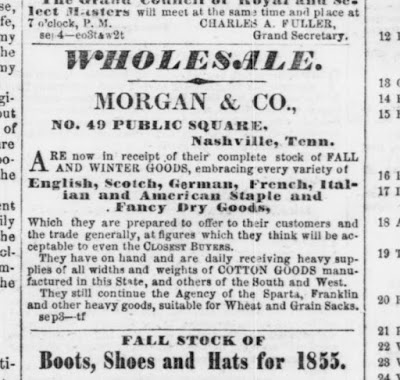 On September 3, 1855, an article appeared in the Daily Nashville True Whig, about the new building, describing the merchandise within and naming Samuel D. Morgan as the "projector and builder of this fine edifice."

On April 13, 1856. a fire started in the basement of the Nashville Inn, on the public square.  A strong wind blowing from the north soon spread the flames across the square, onto the roof of the courthouse and to the south side heading toward Broad Street.  A news article from the Nashville Union and American, on April 15, 1956, described the fire.


"The spectacle presented by the two burning buildings, and the flying sparks was fearfully sublime.  Since the memorable meteoric shower of 1832, we have seen nothing so grand, and yet so awe inspiring.  It seemed the city was doomed… Before the Courthouse was more than half burnt the large ware houses on the corner of Market street and the square, and on Market street, belonging to H. & B. Douglas, and occupied by Hugh Douglas also took fire, and in succession the stores of H. G. Scovil, druggist, Strickler & Ellis, and  Gardner, Shepherd & Co, on the square, shared the same fate, the lofty brick wall of Morgan & Co's store checking the further progress of the fire in that direction."

The stores mentioned above, Douglas warehouse, H. G. Scovil's drugs, Strickler & Ellis and Gardner, Shepherd & Co. were all on the north side of the square running west from Market Street to the Morgan building.  The fire stopped at the Morgan building.  An accounting was given in the paper of losses suffered, naming the businesses and the amount of the loss.  The Morgan building was not listed and it suffered little or no damage from the fire. Buildings along the south side of the square were saved by persons on the rooftops, with buckets of water, keeping the fire to a minimum, halting the spread of the fire to the south.


On August 14, 1856, four months after the fire, a notice appeared in the Nashville Daily Patriot, announcing that the business house of S. D. Morgan & Co. is under a regular transformation in color. We must say we admire the taste displayed, and that this fine building shows to much better advantage, than it did previous to the change.  An adjacent notice, told of the new buildings under construction on the north side of the square. 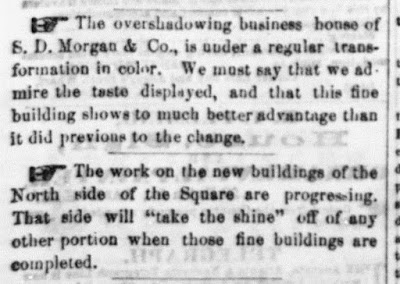 S. D. Morgan's building survived the great fire of 1856 and prevented the progress of the fire to the west. It was a Nashville landmark for more than 120 years.  It could not escape Nashville's version of progress and fell to the wrecking ball in 1975.  That block on the north side of the square is now home to Metro Nashville's Criminal Justice Center.

Update - The Criminal Justice Center was demolished in 2016.  The site will be used for a new Davidson County Jail.
Posted by Nashville History at 10:45 PM No comments: