By Anson Nelson Recording Secretary of the Tennessee Historical Society

We regret very much that we cannot refer to our numerous manufacturing establishments, our magnificent wholesale and retail storehouses, our numerous charitable secret associations, our banks, insurance offices, railroads, our Tennessee Historical Society, our medical schools, our private libraries, our orphan asylums, our noble institutions for the Insane, for the Blind,-etc.
One word we must say in regard to the School for the Blind, sustained by State aid. They have, ever since the war, very much needed a suitable building for their poor unfortunate in mates. The appropriations by the Legislature being too small, one of our most enlightened and liberal citizens (the Hon. John M. Lea) came to the rescue, and bought and gave the State an elegant house, with fine grounds attached, at an expense of $15,000, the buildings on which have been enlarged by the State. This timely benefaction has been an incalculable blessing to the blind throughout Tennessee. J. M. Sturtevant is the Principal of the school for the blind.
It will be seen that many matters of small importance have been mentioned in the sketch, even to the exclusion Of matters of perhaps rare interest. This is done for the reason that it is important to save the minor items from oblivion, while more important things will surely be perpetuated. The object has been to point an index finger for others to write a better sketch in future.


******************************
Anson Nelson was born November 19, 1821 in Washington County Tennessee. He was married, to his first wife Eliza Grady, in 1839 at Knox County, Tennessee. He and Eliza moved to Nashville in the 1840's. After Eliza's death, he married Fanny Howell at Nashville in 1868. Nelson was in the banking and insurance business. He owned and served as publisher and editor of several local newspapers, including the Nashville True Whig and the Nashville Christian Record. He was a civic leader who served in many capacities for the City of Nashville. He had a real estate company and bought and sold property across the county. He served on the Board of the Tennessee Historical Society. He was a founder and served on the first Board of Directors of Mt. Olivet Cemetery. He was a founder and first President of the South Nashville Railway Company. Nelson was a member of the First Baptist Church in Nashville, serving as deacon and superintendent of the Sunday School. Nelson was an author and wrote about the history of Nashville. He and his wife co-authored a biography of First Lady, Sarah Childress Polk. Nelson died August 5, 1892 in Nashville and was buried at Mt. Olivet Cemetery in Davidson County.

The "Brief Annals of Nashville" was transcribed from Report of the Board of Health of the City of Nashville, 1877.

Mary Eliza Wilson was born in Paris (Henry Co., TN) May 25, 1848.  Mary married Achilles Venable Clark of Paris, a Confederate veteran, on December 4, 1866.  Achilles Clark died on July 29, 1874, leaving his widow with a young daughter, Caroline.  Mrs. M. E. Clark decided to pursue a career in teaching.  She lived and taught school in Franklin, TN, for about ten years.  In 1880, Mrs. Clark leased the Tennessee Female College, in Franklin, from Methodist Bishop R. K. Hargrove.  She oversaw the operation of the school for five years.  At the expiration of Mrs. Clark's lease, in 1885, Bishop Hargrove decided to sell the school property.

In January of 1885, Mary E. Clark came to Nashville and purchased lots 6, 7, 8, and 9, in the plan of Brownsville, in East Nashville, a total of about fourteen acres of land.  She payed $3400 in cash for the property at the corner of Scott and Greenwood Avenues.  Mrs. Clarks property was bound by, and just east of, the site of Hobson's Chapel Methodist Church.


Mary soon had a substantial house constructed to serve as a school for girls.  Mary's school was a three and one half story building of red brick, designed as a suburban home. The Victorian, Queen Anne style house had turrets and towers, with bay windows, and a multi gabled roof.  A large wrap around porch at the front of the house, and a smaller porch toward the back, were adorned with fancy lattice work.  The house, with the appearance of a grand mansion, was as fine as any, of that era, built in Nashville.  Soon after the school was built, Mary received a bill from the tax assessor, the amount of which she felt was too high.   Mary wrote, in an appeal for lower taxes, to the county assessor's office, that she was owner of property "on which was erected a building for school purposes exclusively."  She stated that on June 8, 1886 this school was incorporated by the name of "The Mrs. M. E. Clark Select School for Young Ladies." 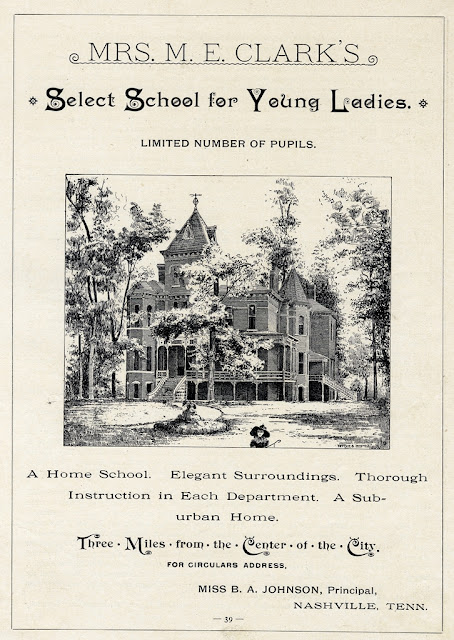 The Board of Advisers, for Mrs. Clark's School, was headed by Charles Forster Smith, noted author and professor at Vanderbilt University.  Other members were the Honorable J. M. Dickinson attorney and president of the Tennessee Bar Association, Mr. Edgar Jones a banker and grandson of Rev. William Hume, Maj. J. S. Bransford, a land developer who lived at Edgefield near Mrs. Clark's School, Rev. G. W. Wilson, a well known Evangelist of the Methodist faith., and Maj. T. P. Weakley. Major Weakley's brother was a prominent Methodist minister.  Although not affiliated with the Methodist Church, the influence of that denomination was certain. Mary Clark worshipped, next door, at Hobson's Chapel as did some of her staff.  Mary's students also attended services at Hobson's Chapel.

The girls were welcome residents in the attractively furnished home which featured the most modern conveniences.  School was in session from the first Tuesday in September until the first Wednesday of June. Classes were offered in English, Mathematics, and Art, with special emphasis given to French, German, Public Speaking, and Music.

In 1891, it was reported that the school had 6 teachers and 45 students. Tuition was $170 per year, with an additional fee for the study of piano or vocal music. The large campus provided plenty of room to explore outdoors.  There were tennis courts on the grounds and outdoor sports of every kind were encouraged.  Walking was a healthful means of entertainment and transportation. The Nashville public square and business district was near, only a couple of miles to the west.  Yet the area around the school was rural, a forest like setting, with huge trees on the grounds.


Mrs. Clark's School was highly regarded as an educational facility.  Young women from prominent families, all across the country, attended the school.  The Principal, Miss Bessie Johnson, and faculty members were among the best educators in the south.  In the 1890's, Mrs. Clark's School continued to thrive.  She traveled to Europe, to study the latest methods in educating young women.  She, and her staff, worked to ensure that the curriculum was broad, balanced, and up to date.

In 1896 Mrs. Clark was involved in a terrible carriage accident. She died from her injuries on July 1, 1896.  Her remains were carried to Paris, Tennessee where she was buried next to her husband, Achillies Clark.  The school was closed soon after.  Over the next few years, Mrs. Clark's daughter Carrie Clark Crockett, wife of Sidney Scales Crockett, divided and sold the property.  Today, the site of Mrs. Clark's School is home to Cora Howe School, on Greenwood Avenue, in East Nashville.

Mrs. Clark's School, East Nashville by Debie Oeser Cox is licensed under a Creative Commons Attribution-NonCommercial-NoDerivs 3.0 Unported License.
Posted by Nashville History at 12:33 AM No comments: