Posted by Nashville History at 7:59 PM No comments:

We have lost many buildings in Nashville.  While the loss is sad and in some cases tragic, there is nothing that can be done to reverse it, we can't bring them back.  I want to focus on the buildings still standing.  The more people who know the history of these buildings, the more likely that some of can be saved.  In this post I am researching the buildings on the east side, in the 200 block, of 3rd Avenue North, near the public square. I don't plan to spend a lot of time on each building.  Sometimes it is easy to find information and at other times, hours of research turns up very little.  I will share what I dig up and if I find more information later, I will update the post.  Several buildings are gone.  At what would have been 200,through 206 3rd Avenue North, are now surface parking lots. The building at 208, is the first we come to in the block. I discovered that most of the buildings in this block were occupied by furniture stores, in the late 19th century through the mid 20th century. In the latter half of the 20th century, many law offices were located in buildings along this block.

An image of the building at 208 3rd Avenue North appears in Confederate Veteran Magazine, Vol. 2 in December, 1894.  The building at the address now, is literally one half of the original building.  Start at the top and observe the small arched windows across the front to the fifth floor.  On the fourth and third floors there are larger arched windows and on the fourth floor the windows are hooded.  On the second floor the windows are rectangular. The symmetrical entry is little change today from the original.  Amazingly, the facade of this 120+ year old building is unchanged, with the exception that half of the building is missing! 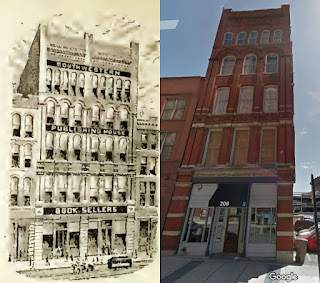 The address was 208 North College Street back then.  Described as "the new five story brick building," it was to soon become home to Southwestern Publishing House.  From 1942 until about 1978, the building housed a branch of Morris Furniture Company.  The building space was advertised for lease in 1984 as historic, renovated building.

From the outside, 210 and 212 appear to be one three story building with two different store fronts and addresses.  Deed records describe a 13 inch brick wall separating the two. The two were sold as separate buildings but at times one business occupied both. The structures are shown on an 1894 plat of the Foster property.  A circa 1908 photo shows two, three story buildings, both with a mansard roof. No mansard roof adorns the buildings today.  Deed records show there was a brick storehouse at both 210 and 212, separated by a 13 inch brick wall, as early as 1894.  A deed in 2014, has the same description for the buildings, as the 1894 deed. Newspaper records show that the buildings seemed to be continually occupied for the most part, from the 1890's through current times. An estimate based on deed research, and newspaper and city directory searches points to a circa 1890 construction date. Without an up close examination the buildings by an architectural historian, it is difficult to determine if the buildings of today are the same as those from 1894.  The image below shows the 200 block beginning with the building at 208 in the foreground.  The tall building in the distance is the Stahlman building, completed in 1908

In 1888, L. R. Freeman was  located at 210 North College and was at the address until 1894.  There was a fire in the building in February 1894.  The damage to the building was minimal but R. L. Freeman's inventory of wallpaper, pictures, frames and other items were heavily damaged by water used to douse the fire.  Soon after L. R. Freeman's shop moved to Union Street.

In the spring of 1896 P. J. Tinsley's Millinery Store opened at 210 North College. By 1900, Shelton and Lawrence Furniture Co. was in the building, soon replaced by E. M. Bond Furniture Co. followed every couple of years by a different furniture company.


In 1940, Robert Payne and Paul Riddle, opened their furniture store at 210 3rd Avenue No.  After a few years, Riddle sold his interest to Robert Payne's wife, Tyler Payne.  The Payne's ran the business until Mr. Payne died in 1968. In the beginning, the store occupied the first floor bu after a few years expanded to the second and third floors. In 1956, the Payne's were able to lease all three floors of the adjoining building at 212.  Mrs. Payne took her daughter and son in law as partners at that time and they continued the business until the mid 1970's when Payne Furniture opened a new store in Green Hills.  Payne Furniture was the last of the many furniture stores that had been in the block between Bank Alley and Church Street, along 3rd Avenue North, for about 100 years.

In the late 19th century 212 was occupied by Rundle & Son, an auction house and furniture company. Rundle was replaced by A. Frank & Co. in about 1909.  The company sold wallpaper and other household decorator items.  They remained in business until 1928, when Mr. Frank died.  Mrs. Frank, continued the business for a couple of years after but closed in 1931.

The building at 214 does not appear to be as old as the adjacent buildings.  The current building is four stories in height. A three story building was on the site in 1908, as evidenced in the TSLA photo of Third Avenue North posted above.   Current records are no help, as they give a 1900 date for construction.  The estimated dates listed on the assessor's record card are notoriously off the mark. Sometimes by decades.  I have not been able to determine when the building was constructed.

214 3rd Avenue North, like its neighbors was home to several furniture stores over the years.  Walter and Wilson Bracey started business at 214 Third Avenue North, in 1920, under the name, Nashville Furniture.  Nashville Furniture also used the store at 216 for many years. Walter Bracey announced the move of his furniture store from Third Avenue North in May of 1969.  In 1969 the building was purchased by a local law firm, renovated for use as office and residential space.

The building at 216 3rd Avenue North, appears be the same one in the ca 1908 street view photo.  There is a newspaper ad in May of 1889, that announces that J. W. Barnes must sale their stock and move from 216 North College as the old building is going to be replaced with a new building.  This would date the existing building to ca 1890.

The property was owned by a Mr. Metz at this time.  Some of the businesses that occupied this site, after 1890, were Geo E. Cooper, who sold stoves, and Jones and Hopkins, manufacturer of stoves.

In the teens, Nashville Furniture Company moved in and stayed through the 1940's.

Beginning in 1950 an John W. Murphree moved into the building, opening a real estate office, mortgage company and an insurance office.   In April of 1960, attorney Cecil Branstetter bought the building.  The former furniture store row, quickly turned into lawyer row.  The buildings along the block were conveniently close to the Davidson County Courthouse. Branstetter sold the building, in 1976, to attorneys Robert L. Jackson and John R. Reynolds.  The men renovated the building for the firm of Jackson, Tanner & Reynolds.  After a recent renovation, the building is being used for office space.

This building, part of lot 26 of the original plan of Nashville, has used street numbers of 218 and 220 and at times served as two store fronts using both numbers.  Today it is designated as 218 3rd Avenue North.  In 1897 Nashville Outfitting Company occupied the building as 218-220.  Nashville Outfitting was a furniture store, that had been located at 209 3rd Avenue North. In 1897 the company moved to this location where it was reorganized and chartered. The incorporaters were A. G. Rhodes, Paul Sharpe, A. C. Scuddy, J. A. Ritter and T. J. Watkins. There is a photo of the 1890's building on the Tennessee State Library and Archives website and it is five stories tall.  the current building i four stories.  An ad for H. Cohen and Company, in 1911 mentions a new store.  This may be when the current building was first occupied.  Over the next 50 years, there was a furniture store operating here.  The owners and store name changed.  H. Cohen and Company, Sharpe & Howse Furniture, Reed Sharpe Furniture Company and Exchange Furniture were some of the stores following Nashville Outfitting, from 1897 through 1961. After 1961, there were a number of different tenants, and the building was used as office space.  The building also played a role in the Jimmy Hoffa story.  When Hoffa was on trial in Nashville in 1962, his attorney Z. T. "Tommy" Osborn, had offices in this building.  It was alleged by Osborn that federal agents, illegally tapped his office phones and stole documents from his office.

The building was built by Gray & Dudley Hardware Company. Construction started in 1899 and it was opened for business in October of 1900.  Gray & Dudley purchased the land, in 1899, in four parcels.  All were a part of the original town lot, number 25. 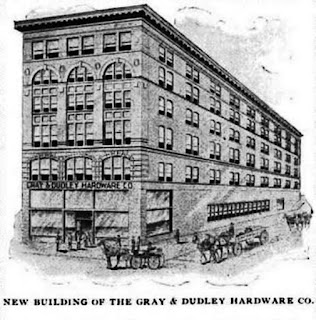 The property, part of lot 25 in the original plan of Nashville, was sold in July of 1921, to the Federal Reserve Bank of Atlanta.  The Nashville Branch of the Federal Reserve Bank opened in December of 1922 at 226 3rd Avenue North, and occupied the building until 1958.  The architect was Ten Eyck Brown of Atlanta, working with the Nashville firm of Marr and Holman. General contractor was Foster & Creighton Company.  The Neoclassical building is of brick construction, with a front of white limestone, and a massive pedimented portico supported by Ionic columns. The building was added to the National Register of Historic Places in 1984.