Frank Spencer Sutton, better known to most as Sergeant Carter, from the Gomer Pyle televisions series, lived in and did most of his growing up in East Nashville.

Sutton was born in Clarksville TN on October 23, 1923, to Frank Sims Sutton and Thelma Spencer Sutton.  Sutton's father worked for a local newspaper in Clarksville.  In a 1968 interview with Tennessean Staff Writer Jim Andrews, Frank Sutton said that because of his father's bad temper, the family moved around a lot, when he was a small child.  His father didn't stay with a job very long, moving his family to Evansville, Ind., Elkton, Ky., Paris Tn. and finally to Nashville in the mid-1930's. His father had taken a job at the Tennessean as a linotype operator. They moved into an apartment house at 940 Russell Street.  The family attended Tulip Street Methodist Church.  Frank became an active member and acted as the scribe of Boy Scout Troop 34, which met at the Tulip Street Church. He very likely attended Warner School, located a few blocks from the family's home.


In the fall of 1937, Frank entered the 8th grade at the brand new East Nashville Junior High School.  It was at East Junior where Frank caught the acting bug.  In an interview about his teen years in Nashville, Sutton recalled that his first role was at East Junior in the play, Romance in a Boarding House. In March of 1938, Frank's father died suddenly. Frank and his mother continued to live at 940 Russell Street.  His mother went to work at The Tennessean as a proofreader.

Public high schools in Nashville started with the 10th grade back in those days. Frank was a sophomore at the beginning of the school year in the fall of 1939 when he entered East High School. He tried out for the football team and was injured in the first scrimmage of the season.  In November he was back in the game and it was reported in the newspaper, that he "gave a commendable performance."    Frank joined the Spanish Club.

By the middle of his sophomore year, Frank was involved with the drama club at East High.  He landed a role in the play, The Life of Mary Kellar.  He also appeared in the East High production of, The Valiant.

In the fall of 1940, Frank, now a high school junior, became a member of the Delta chapter of Phi Alpha Pi, a high school fraternity.  Though frowned on by administrators, high school fraternities and sororities were very popular in the 1930's and 40's.  The fraternity held a winter banquet and dance for members at the Hermitage Hotel.  Frank Sutton attended with his date, Miss Amelia Whitsitt of East Nashville.  In December Frank had a role in, You Can't Take It With You. The play was presented by the drama club under the direction of Miss Carolyn Binkley. In the spring semester, Frank began acting with the Community Playhouse, appearing in The Pursuit of Happiness and Toad of Toad Hall. In June just after the end of the school year, Frank was cast in a play called Male Animal.  Another cast member was Miss Ophelia Colley, who would later marry Henry Cannon and become known the world over as Minnie Pearl.

During the summer of 1941, Frank and his mother left the apartment at 940 Russell Street, where they had lived for seven years. Frank lived on Russell Street for a longer time than he had lived anywhere in his young life.  The Suttons took an apartment in a building at 101 19th Avenue South, the corner of 19th and West End. Frank began his senior year of high school at Peabody Demonstration School.  Frank continued his acting career starring a number of plays with the Children's Theater and the Community Playhouse, as well as the Peabody Players.  Some of his fellow cast members during his senior year were Bettie Page, who would become known as the "Queen of Pinups," and Delbert Mann, who would become a widely known, stage, television, and movie director and producer.  Frank was a member of the yearbook staff and co-editor of the Volunteer, the student newspaper at Peabody Demonstration School. 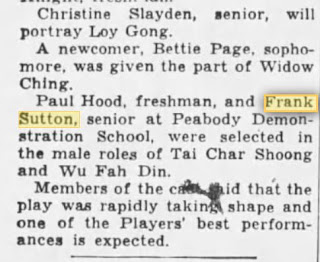 Frank graduated from Peabody Demonstration School in the spring of 1942.  He continued to act in local theater.  He had a radio show on Saturday mornings on WSIX, where he played multiple roles of the announcer, Philip the Frog, The Wise Old Owl, Miss Forsynthia, and Teaberry.  In a 1964 interview Frank said that after graduation from high school, he briefly went to work for Neuhoff Packing Company. He said that he also worked for a short time as a radio announcer in Clarksville.
Sutton had tried to join both the Marines and the Navy.  They turned him down because he was color blind.  In March of 1943, Frank was inducted into the Army, where he served in the Signal Corp.  A website called army together we served, gave details of his service.

"He was assigned to a Joint Assault Signal Company (JASCO), composed of Army and Navy men. Within 18 months he took part in 14 landings in the Pacific, including Leyte, Luzon, Bataan and Corregidor. When the war ended, he was sent to join the occupation forces in Korea, where he wrote, directed and produced ''The Military Government Hour,'' a radio propaganda program."

Sergeant Frank Sutton returned to Nashville on his discharge from the Army in January of 1946.  He jumped back on the stage his first month home. He was cast as Nick, in The Time of Your Life. The play opened on February 4, at the Community Playhouse, after a couple of weeks of rehearsal. From January until September Frank continued to act, and design and build sets for community playhouse.  In the fall of 1946, Frank enrolled at Columbia University to study dramatics and speech.  He came home for the summer of 1947 and once again took to the stage with Community Playhouse in a summer production of, Love for Love.  Frank returned to Columbia University in New York in the fall.  Frank spent the summers of 1948 and 1949 with John Kenley's Deer Lake Theater Company. It was also in 1948 that Frank played his first role in television.  In August of 1949, he was married to Toby Igler. The couple met at Columbia University.

Frank returned to the stage in Nashville, in December of 1949.  John Kenley's Deer Lake Theater Company brought to the stage of the Ryman Auditorium, a production of The Barrett's of Wimpole Street. Frank played the role of Dr. Chambers.

In October of 1950, Frank landed a role in the Nash Airflyte Theater television production of, O. Henry. The show was broadcast from New York on the CBS network. Frank and Toby lived in New York and he continued to act on the stage and in television.  In 1955 Frank was cast, by his friend and former Nashvillian Delbert Mann, in the Academy-Award winning movie, Marty. Frank played many television and movie roles, including a long run in 1959, in a soap opera, The Secret Storm.  In 1961, he was in a leading role in the movie, Town Without Pity. In 1964, Frank and family moved to Hollywood, where he was to have a supporting role in a new television show, Gomer Pyle, USMC, starring Jim Nabors.  Frank took the character of Sergeant Vince Carter and made it his own.  Sergeant Carter's role in the show moved from being supportive to being a starring role, equal to Nabors.

Frank Sutton spent his life as an actor, beginning his career on the stage at East Nashville Junior High and continuing on Broadway, in Hollywood, and around the world.  Frank died of a heart attack, on June 28, 1974, in Shreveport, Louisiana, at the Beverly Barn Theater.  He was just moments away from going on stage. Earlier in the week, he had told a co-star, that "if an actor has to die, a theater is the place for him to die." Frank was survived by his wife Toby, his children Joey and Amanda, and his mother and stepfather, Thelma and L. B. Shepard.

Posted by Nashville History at 7:32 AM 6 comments: