Do you remember E. B. Smith at 2nd and Woodland? Or Coggin Chevrolet earlier? The showroom is the only original building left on Woodland Street, west of the interstate. The property is probably going to be developed soon. The building is not pretty, nor does it have any architectural significance. No reason to save it. But before it passes into oblivion, I wanted to take a few minutes to remember.

The Walter Williams, Jr. Collection may be my favorite of all the collections at Metro Nashville Archives. Mr. Williams, and his father, both pilots, made many of the vintage aerials and skyline shots, from the 1920's through the 1950's.  Over the past 15 years or so, Mr. Williams has donated many photographs to the archives or allowed us to scan some of those he wanted to keep in his possession.

One set of photos in the collection depicted the flood in Nashville in December, 1926 and January, 1927.  Every time I looked at one of the photos from the set I would spot something new.  A view looking towards East Nashville had the Shelby Ave. Bridge in the foreground.  The background was not clear,  but I could pick out First Street and Shelby Street and Woodland Street easily.  The Meridian St. Viaduct was visible.  With a magnifying glass I could see the National Casket Company and just across 2nd from the casket company, was a one story building. The building didn't look quite the same as the present building but had the general shape and was the same height.


I want to share some of the photos and news ads, that I gathered for the building.  Below is an image from the 1927 flood, taken from Woodcock collection at Metro Nashville Archives. The building would have been home to Dressler-White at this time.

Nashville City Directories and deed records were my next stop.  It did not take long to find out that an auto dealership had been on the site since 1920.  I also did a deed search on the property and found out a bit more about the earlier history of the building site.

The building is still standing today, at 201 Woodland street. It appears that several feet may have been cut from the front of the building when Woodland Street was widened.  The front facade has been changed more than once, I suspect.  It has been home to several auto dealers, other than Coggin.  The first was Hippodrome Motor Company, in 1920, owned by Tony Sudekum.  Mr. Sudekum also had a branch of his auto company at 910 Broadway.

In 1922, Dressler-White Company was in the building selling Ford autos and Fordson tractors.


By 1928, Dresslar-White was still there, but Fords were out and Willys-Knight and Whippet autos were for sale.  They probably should have stayed with Fords.


Later, Dresslar-White became a dealer for the Chevrolet Company.  Dresslar-White Company was in business at 201 Woodland until 1953.  They had expanded down the block a bit, covering lots from 201 to 207 Woodland.


Coggin Chevrolet opened in 1953 in the old building at Woodland and 2nd.  The dealership was owned by William E. Coggin.  Mr. Coggin had been in the auto business for many years, both in Nashville and in Florida.  He had previously worked at Jim Reed Chevrolet as sales manager. 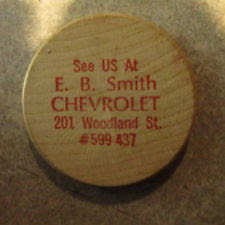 E. B. Smith was located on Woodland until 1985, when the business moved to Hickory Hollow.  In November of 1985 an auction was held at the Woodland St. location.


Since 1985, there have been many different businesses in the old building.  For a few years there was furniture store, operating there.  The building has been home to more than one night club and bar, most recently The Limelight.  East Nashville is changing rapidly and the block where the auto dealership began in 1920, is on the threshold of development.  So many old landmarks are disappearing every day.  This building doesn't hold any real historical value.  It has been changed and altered a great deal over the years.  It does have a place in the memory of all who lived in East Nashville and passed by on a regular basis.  There must be many good memories for those who bought a first car off of the lot on Woodland Street.

Memories are all we have left, of so much of Nashville.