and a few other things in my files concerning the Civil War.

The Confederate Veteran was published from 1893 until 1932. There are articles about the Civil War, reunions, obituaries and photographs.

This is a link to issues that are online.  Confederate Veteran Magazine.


You might find a relative, including a photo.  B. F. Binkley was my great-great-great uncle and lived in Nashville, TN.


Military Hospitals in the City of Nashville as published in The Daily Press, Nashville, Tennessee Friday January 15, 1864

An Index of some Civil War Burials recorded by W. R. Cornelius, undertaker for the Union Army at Nashville, 1864 -1866


Posted by Nashville History at 2:03 PM No comments:


Anything with a connection to East Nashville piques my interest. I wanted to know more about the nursing home, and I really wanted to find the history behind the house it was located in.

Edgefield Nursing Home first shows up in Nashville City Directory listings in 1939. The address for the home was 720 Boscobel St. and the manager was Mary Kate Stone. She and her husband Thomas L. Stone, owned the house on Boscobel. Mary Kate had ten patients and was aided by two housekeepers who lived on the premises. In the early 40's Kate and Thomas L. Stone separated and they were divorced in 1942. Mary Kate gained possession of the house at 720 Boscobel and continued to manage Edgefield Nursing Home.

About 1946, Kate married again, to Robert Gilmore. Late in the year of 1947, Robert and Mary Kate purchased a big, two story brick house at 400 South Fifth Street. Back at that time, before the federal housing for the elderly was built at south Fifth and Shelby, Boscobel Street came all the way through to intersect South Fifth, almost across from the house that the Gilmore's bought. Robert and Mary Kate along with her children with Mr. Stone, continued to live at 720 Boscobel but moved the nursing home business to South Fifth Street in early 1948.

I didn't find many details about Edgefield Nursing Home. A few online obituaries announced that the deceased passed away at the home. The latest date that I found was when Mrs. Missouri Maxwell, died there on Friday, February 4, 1966. Mary Kate Gilmore had already sold the property to Metro Nashville Government in 1964, but apparently was allowed to continue the nursing home business in the house. Finding enough about the nursing home to be satisfied, it was now time to find out more about the house.

Property records told me the property that the house was built on was originally a part of Shelby's Second Addition to Edgefield, that was filed in 1867. Alanson and Virginia Sanford bought several large lots of the property and in 1873, subdivided a large tract into 10 lots. Five of the lots fronted on Oak Street, now South Fourth Street and five on Tulip Street, now South Fifth Street each being 50 feet wide. 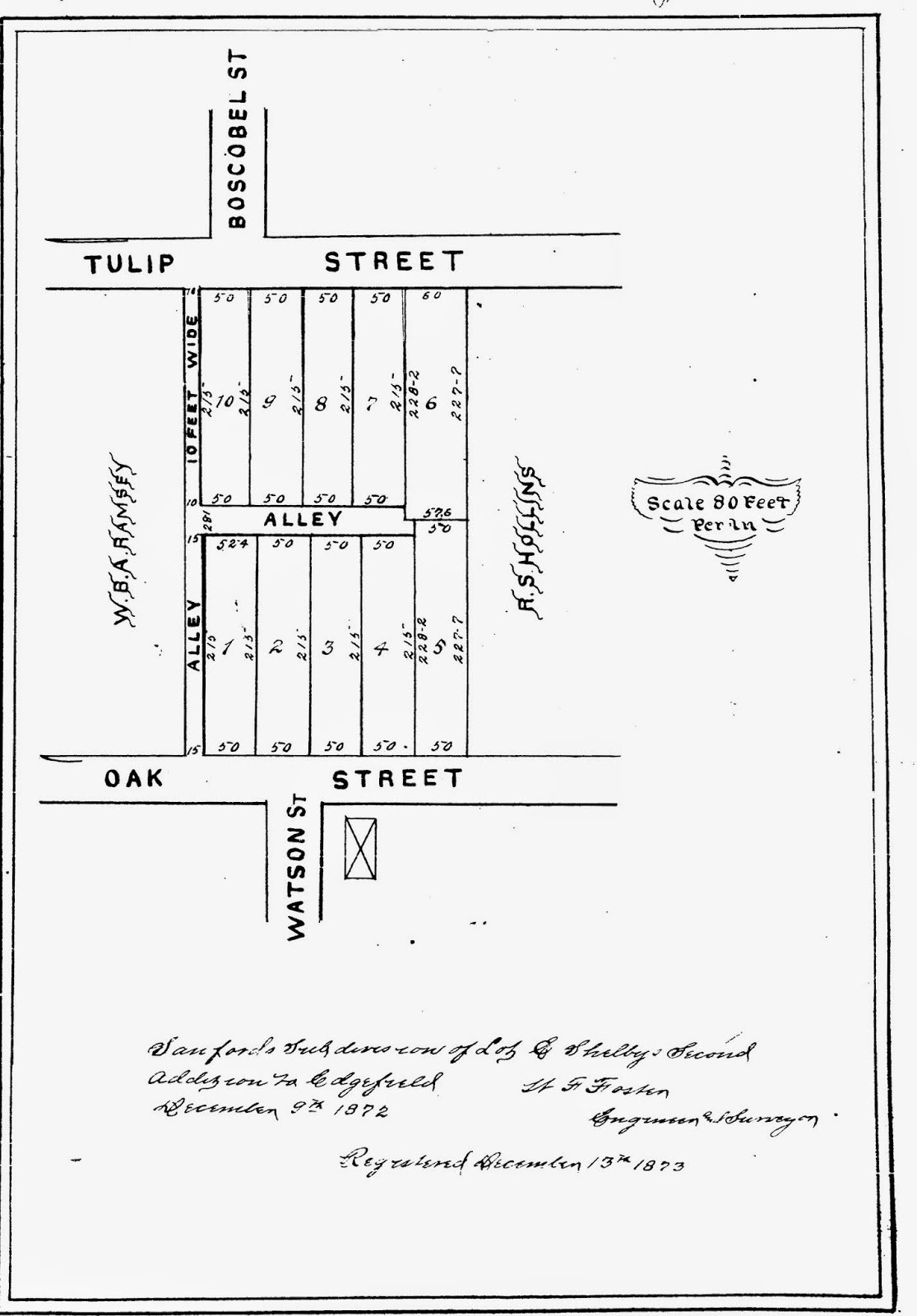 The lots backed up to one another and were divided by a narrow alley along the rear of the lots. In 1874 William Henry Webb purchased the five lots along South Fifth, numbered as lots 6, 7, 8, 9 and 10. William Henry Webb was in the grocery business and his firm, Webb, Scoggins & Company was located across the river in Nashville on Market Street. His partners were his brother, Robert Clark Webb, his son Leonidas Theodore Webb and Samuel Scoggins.

Webb soon built an house on South Fifth. The Italianate house was of red brick and two stories high. The windows and doors were arched and there were porches on the front and the back of the house. One record described the property where the house stood, as five lots that were used as one, embellished with trees, shrubbery and gardens. William H. Webb was married three times and was father to a total of eighteen children, many of whom were adults by the time he built the home on South Fifth Street, where he lived with his third wife Margaret Kerr Webb and some of the younger children. After his death in December of 1890, his wife Margaret and her son Dwight Webb, and her step daughter Mary Smith Webb lived in the house, that William had built for Margaret.

In 1902, William Webb's daughter Mary married an Irishman name Andrew O'Brien. Andrew purchased the interest in the property held by Mary's siblings and by 1910, Andrew, Mary and her step mother Margaret shared the house with several servants.


Margaret died in 1915. In 1920, Andrew and Mary Webb O'Brien, Andrew's neice Mamie Burke and three servants were living in the house. Andrew passed away in 1920 and Mary and Mamie stayed in the house together, still employing servants in 1930. By 1935, they had taken in boarders, two couples who had their own apartments in the house. Mary Smith Webb O'Brien died in February of 1940. She left the house to her husband's niece Mamie Burke. It was sold several times before the purchase in 1947 by the Gilmore's.


Posted by Nashville History at 12:30 AM