When the public square was still intact, a bus trip from town to East Nashville over the Woodland Street bridge took one past the Neely Harwell building. No one around today can remember before it was there. It has been gone for about 40 years, a victim of urban renewal. This was a wholesale company with a sales team that spread out across Middle Tennessee and several states selling their dry goods and notions to retail stores. The business began in 1910 with a merger of two companies, Warren, Neely & Co. and Harwell, Park & Co. George M. Neely and Samuel K. Harwell became principals in the new firm. 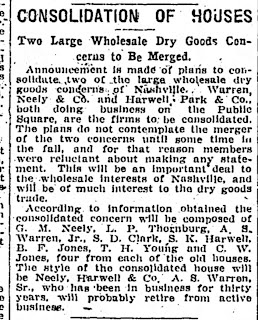 Both Neely and Harwell had been in the dry goods business for some years. Neely had partnered with A. S. Warren in 1893. Warren & Neely reorganized in 1895 and brought in S. K. Harwell. Harwell went out with his own business for a while but came back in 1910.


By the early 1960's the company had expanded into the adjacent building to the north. That building can be seen in the 1884 photo.

In 1976, the buildings on the east side of the public square were demolished for an urban renewal project. Neely Harwell and Co. moved across the river to Russell Street in East Nashville. In 1993 the company closed after almost one hundred years in business. The Gay Street Connector now runs through the property where these building stood.


Posted by Nashville History at 8:18 PM No comments: