Most everyone who lived in East Nashville and Inglewood from the 1930's through the 1970's knew the name Cleo Miller.  Dr. Miller gave much to the community in which he worked most of his life and where he lived in his younger years.

Cleo M. Miller was born in 1903 at Dechard, Franklin County, Tennessee.  His parents, Joseph Edward Miller and Aurora Thelma Woll, were married on June 12, 1902 in Franklin County.
His father died soon after Cleo  was born.  His mother brought him to Nashville as teen, perhaps so that he would have access to good schools.   Aurora Miller soon found a job at Lebecks department store as a salesperson.  Aurora left Lebecks after a few years and went on to work for many years at Cain Sloan department store.  Listed in the 1920 census,  Aurora and Cleo were living at 1621 Holly Street in East Nashville.  Late in 1920 Aurora married Elmore Hill.  Their son Elmore, Jr. was born in 1922.

Cleo graduated from Vanderbilt in the early 1920's and enrolled in the medical school there.  Cleo played baseball during his med school years and possibly in his undergrad years as well.  He was team captain in 1926 and he held the position of catcher.

Cleo's half brother, Elmore Hill, Jr., graduated from Duncan Preparatory School and Vanderbilt University, just as leo had done.  He went on to University of Louisville Dental School.
Aurora's second husband died in 1935 and in 1940 she was living on Scott Ave in East Nashville with her 18 year old son Elmore.   In 1971, a local newspaper featured Aurora in a story about her 90th birthday party.  She did not believe in telling her age but had 9 candles on her cake, plus one to grow on.  She was still living in East Nashville on North 12th St.   She celebrated her birthday with her 94 year old sister Katie and other family.  She was a member of City Road Methodist Church and played piano for bible classes there and at Hobson Methodist Church. Aurora died in 1972.

Cleo Miller married Kathryn Cotten soon after he graduated from medical school.  By the time Dr. Miller built the home, Ivy Hall in Inglewood, the couple had two sons, and a daughter was born the next year.  The beautiful Tudor Revival home was built on property that had been part of the Inglewood Golf Club. Today the home is on the National Register of Historic Properties.  The family lived in the house until the early 40's, when Dr. Miller entered military service to support the war effort.  His family traveled with him during his time in the service.  At the end of the war, the Miller's moved into a home on Belle Meade Boulevard and never returned to Ivy Hall.  They moved to the Belle Meade area to be closer to Montgomery Bell Academy, where their sons Jimmy and Jack would attend.

Long after he had moved to the west side of Davidson County, Dr. Miller was a welcome and busy presence in East Nashville and Inglewood.   He worked as a physician and surgeon in East Nashville from 1930 until 1971.  He began his first medical practice in a home at 1308 Stratton Avenue, with Dr. Young Haley.  He and Kathryn lived in an apartment at the office for the first year or so.  Miller Clinic, which he found in 1937, was the nearest medical facility for East Nashville residents. It was a white frame building with three physicians and facilities for surgery and inpatient treatment.  The building was added onto many times and more doctors joined the practice.  In 1977 a new building was erected and Miller Clinic became the Miller Medical Group with more than twenty doctors.  Dr. Glenn Hammonds and Dr. Russell Ward, both on staff at Miller Medical Group for many years, grew up in East Nashville and attended grade school and high school with some of their patients.  Pediatricians, Dr. Philip Elliott and Dr. Dewey Nemec are remembered very well by those who grew up in East Nashville.   Dr. Miller remained as director of the Miller Medical Group until 1971 when he resigned because of illness.   Miller Medical served the East Nashville community for about 60 years, well into the 1990's.

Dr. Miller added a small hospital to the clinic in 1962.  This building was eventually replaced and became became a full service hospital.  In 1968, Hospittal Corporation of American purchased Miller Hospital and the name was changed to Edgefield Hospital.

Dr. Cleo Miller had a lifelong love of the game of baseball and athletics in general.   His interest in athletics, led him to be team doctor for the Nashville Vols baseball team.  He was also team doctor for the highly acclaimed women's basketball program at the Nashville Business College.  In 1959, a group of fourteen Nashville businessmen, which included Eddy Arnold, Herschel Greer, Dr. Cleo Miller and his son Jimmy Miller, purchased the Nashville Vols. The group formed Vols Inc., and sold shares at $5 each in an effort to save the team.  Both of the Millers was served on the board for Vols, Inc. in 1959.  The effort failed and the Vols were soon disbanded but  Cleo Miller continued to support baseball in Nashville.  He and son Jimmy Miller were long time members of the Nashville Oldtimers Baseball Association.

Dr. Cleo Miller died on January 7, 1973 after a long illness.  His name is still remembered, fondly and with respect, by many Nashvillians. 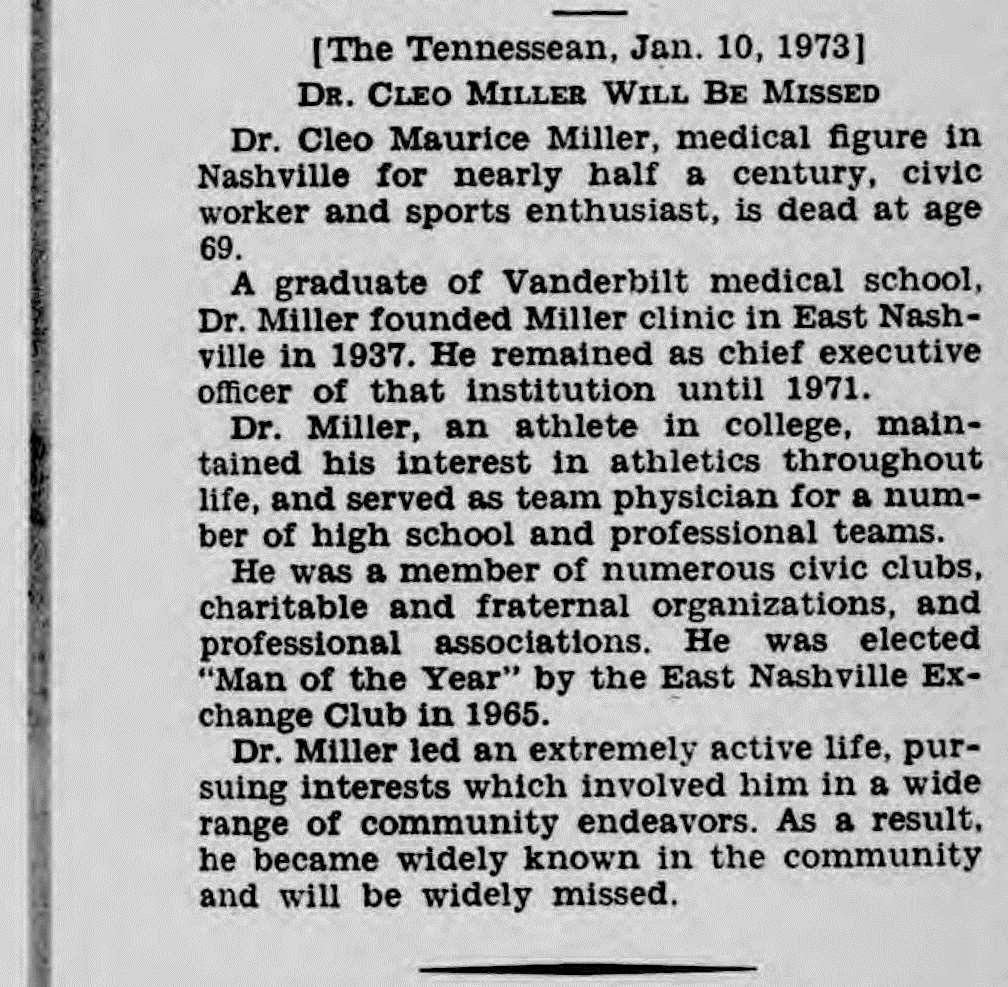