The Nashville Polar Bears have often been the subject of curious conversation and local news articles.  In the day of social media, questions and stories about the bears turn up on Facebook pages about Nashville's past.

The bears origin is traced to the shop of Giovacchino Mattei, once located at 4th Avenue and Elm Street.  Mattei, born in Coreglia, Italy in 1889, came to the United States in 1906 and first lived in Louisville, Ky. He joined other members of his family, already living in Louisville.  The Mattei family operated a company that made plaster figurines for home decoration, in Louisville and supplied large departments stores. The Mattei family had been in the plaster relief business for many generations.

I began collecting news articles about the bears, in the late 1980's after I became a volunteer at Metro Nashville Archives.  The first news clipping that stirred my interest in the bears was an old clipping in a file at the archives.  It was a photo of the two of the bears in front of a frozen custard shop, on West End Avenue.

The caption reads, "Frozen custard is the stock in trade of the establishment which the two cement polar bears above are tossing imitation snowballs over.  The plant, located on West End Avenue opposite Centennial Park, is one of two established here within the last year, the other being located on the Gallatin Road."

The Gallatin Road shop opened soon after, in June of 1931.  It was located at the south west corner of Gallatin Road and Mansfield Avenue, across from Calvin.

An ad in the Tennessean, shows the menu and prices in Oct. of 1932. 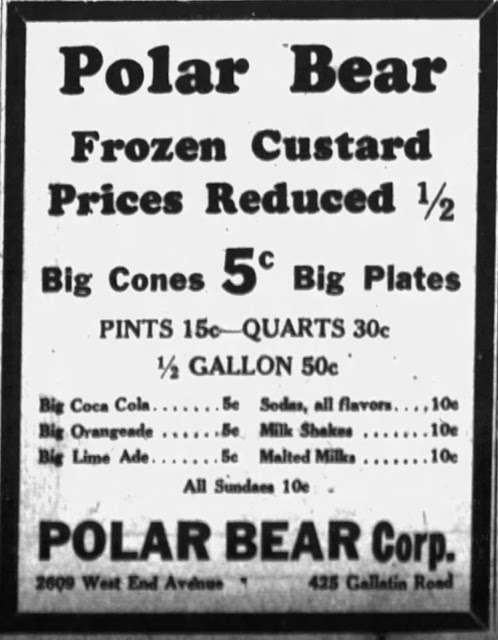 The Great Depression was not kind to the frozen custard business in Nashville.  The stores were  closed at some point, but both reopened in April of 1933 as George's Place, advertising Polar Bear frozen custard, at both locations.


Another ad appeared in late June, advertising frozen custard by the quart and pint.


The unknown George of George's Place apparently didn't last long.  In 1935, the address on Gallatin Road was listed in the city directory as vacant and the West End address listed a gas station.

Not many mentions of the polar bears from 1933 forward, searching through newspaper, directories, and files at the archives.  There was a photo of one of the bears at the South Street location a November 1950 article about cold weather.

In 1973, one of Edgehill Polar Bears was featured on the album cover of Louden Wainwright, III's, Attempted Mustache, recorded in Nashville.


In 1987, Tennessean staff writer, Lacrisha Butler, tracked down all four bears. That seems to be the first effort to find out where the bears came from, and where they ended up.  Butler knew that two of the bears were located on the front lawn, at 1408 Edgehill Avenue.  The house had previously been the home of Reverend Zema Hill, a Nashville minister and funeral director.  Butler talked to Rev. Hill's son, who said his father bought four bears in the early 40's.  Two were placed at Rev. Hill's home on Edgehill.  The other two were placed in front of his funeral home business, at 1306 South Street.  The funeral home was sold to Patton Brothers in 1952 and the bears out front soon disappeared.

Butler discovered two more bears in the Germantown neighborhood bordered by Jefferson Street. She and the new owners of those bears believed they were the missing bears from the funeral home on South Street. Michael Emrick and Phil Rush, who were neighbors in the 1200 block of 6th Avenue North, had recently bought the bears. Both men planned to display the bears in front of their homes.

In 2002, the Edgehill bears were offered for sale.  MDHA bought the bears and placed them in storage. In April of 2003, the Nashville City Paper, announced that the Edgehill bears were going to be permanently placed at the corner of 12th Avenue South and Edgehill, on property belonging to MDHA. In August of 2005, a celebratory unveiling of the bears took place, in the new Polar Bear Plaza. The Plaza was constructed by Mutual Contractors, LLC.

It has been pointed out by a reader that there are polar bear statues in Memphis. A google search of frozen custard polar bears, finds them in many spots around the USA.  Many of the images show bears identical to the Nashville bears.  Polar Bear Custard was sold all over the country and many of the shops had polar bears as decoration. From the images that I have seen, many of these "out of town" bears are identical to the Nashville polar bears. Giovacchino Mattei, may have used his molds to make and ship polar all over the country.  The website Roadside Architecture has many photos of the polar bear statues, in Nashville, Memphis and other locations.