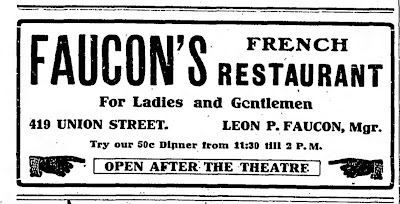 Xavier Faucon, born in France, came to the U.S. when he was 14 years old. He first settled in New Orleans where he married Marie Pons. In 1896 he opened a restaurant bearing his name at 419 Union Street. Faucon's restaurant became known across the south for the thick steaks, duck, soups and the famous Faucon's salad. The restaurant was homey.  The china was mismatched and the atmosphere was casual.

After eight years Xavier decided to make his principal home in Biloxi, Mississippi. This was probably because of a bit of legal trouble Xavier had gotten into for selling liquor in violation of the law. The ownership of the restaurant was turned over to his son Leon Faucon. Xavier often visited Nashville so that Leon could have time away.

Variations of Faucon's salad are served in Nashville today, more than 100 years after it was created by Xavier Faucon. Belle Meade Country Club and Jimmy Kelly's Steakhouse have this longtime favorite on the menu.The original salad was made in a wooden bowl, rubbed with garlic across the bottom. Iceberg lettuce that had been chilled on ice was shredded by hand was placed into the bowl. Finely chopped boiled egg and chopped bacon were added. A dressing was made from 2 parts olive oil and wine vinegar into which salt and paprika and a generous amount of crumbled Roquefort cheese were mixed.

Posted by Nashville History at 10:14 AM